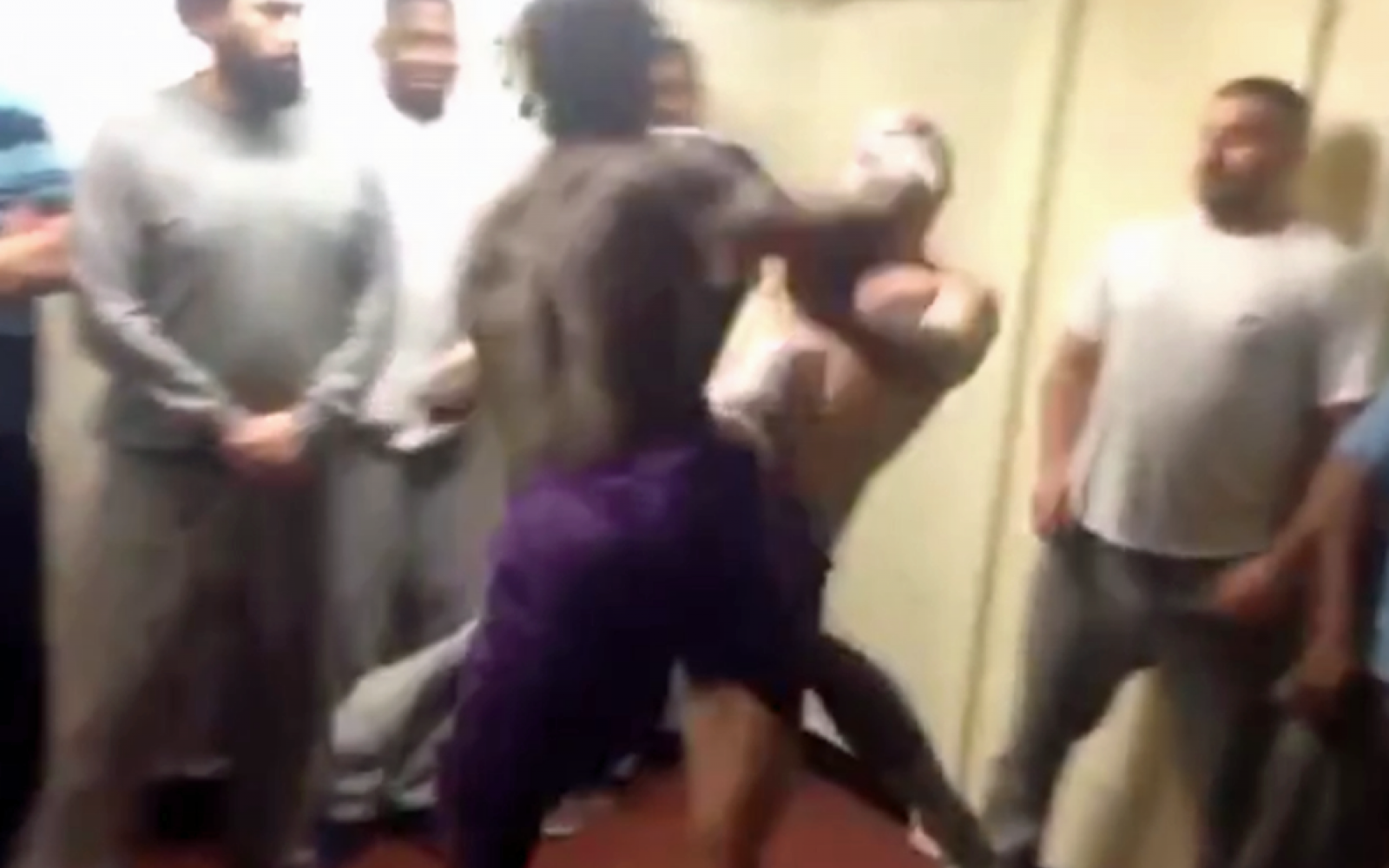 Things are tougher on the inside.  In prison a gay gang called the "Rainbow Warriors" fight for survival against Neo Nazis.  Via Vice:

This article was published in collaboration with the Marshall Project. Sign up for their newsletter.

When I first came to prison, I didn’t know how I should act. I was a gay man, convicted of a sex crime. We’ve all heard the horror stories. But I had one thing going for me: I was big, weighing in at 310 pounds, a fair amount of which was muscle. For the most part, other inmates left me alone.

That is, until the other gays and trans found out about me. At the time, one of the gangs, which called themselves the Aryan Knights, used “beating up fags and chomos (child molesters)” as an initiation for new members. Like I said, they pretty much avoided me—preferring to go after the smaller and weaker. But that meant that a number of gay men and transgender women suddenly wanted to be my boyfriend (or girlfriend), not because they liked me in that way, but because they figured I’d protect them.

For a while, I went along with it. At one point I was the “boyfriend” of six different people at the same time. But I tired of being used, and wanted real companionship, so I eventually started hanging out with just one cute little guy who seemed to have genuine affection for me. I was devastated when I saw him kissing someone else in the gym bathroom.

After that, I almost totally withdrew. The guys still approached me, one after the next: some to “just be friends,” others claiming they wanted more. A few were actually honest about wanting to hang out with me for protection. But I’d always say, “Sorry, not my problem.” I became almost mean about it.

Peter was a young guy who was said to have been charged with a number of crimes he wasn’t ultimately convicted of, including having sex with an underaged boy. Nevertheless, people still considered him a “chomo.”

I was introduced to Peter by my friend Chancey, who’d always get himself involved in other people’s drama. I found the boy adorable, and did want to spend time with him. But when I heard that some other guys were “taxing” him (charging him some of his commissary to live in the unit), my guard went up.

When Peter started to be affectionate with me, I pushed him away. As had become my practice, I told him that his problems were not mine, and that I was not going to fall for him only to be used.

He kept insisting that he really did like me. But I wasn’t buying it.

Then, one day at the gym, as we were walking out to the rec yard, a couple gang-bangers called out to Peter, saying they wanted to talk to him in the bathroom. He looked up at me and asked if I’d go with him. Again, I said no. I advised him to ignore them, but, beyond that advice, I just continued on my way out the door.

Halfway out to the small ballfield where my friends and I usually spent our time, I realized that Peter was not still with us.

I was concerned, but shrugged it off and sat down on a little grassy hill on the edge of the field. The three of us talked about various bits of news and whatever topics came to mind, and before long, I’d forgotten about Peter.

Suddenly, the prison’s siren went off.

Whenever that happens, inmates must remain seated with their hands over their heads, until an “all clear” is given.

But it was never given. Instead, a few at a time, we got escorted back to our units, and locked in our cells.

Later that evening, we finally got out and were allowed to go to the day room. It was there that I learned what happened.

They had beaten Peter until he fell and cracked his head. He’d died almost instantly.

I totally lost it. I went back to my room and cried for a long time. It was my fault that Peter was dead, I thought. I could have prevented it. I could have either gone with him, or taken him by the hand and insisted that he stay with us.

For a few days, I did nothing. I didn’t eat; I didn’t go to work; nothing. I just kept dwelling on the vision of that beautiful small boy lying dead—all because it had not been “my problem.”

Finally, I made up my mind. If I could help it, something like this was never going to happen again.

With the help of two friends, I began to gather many of the gay and transgender inmates in a gang of our own. We even formulated a set of “rules” (really just common-sense advice), such as “never walk anywhere by yourself.”

Our number-one objective was to counter the Aryans’ program of “jumping in recruits” by beating up gays and sex offenders. So we teamed up every time they tried, and after a few of their initiations went south, they began jokingly calling us the “Rainbow Warriors.”

Interestingly, the prison’s administration now started to take notice.The investigations officer, Lt. Higgins, later tagged me as the head of the Rainbow Warriors.

But I don’t care anymore what anyone thinks. When one person is persecuted or abused, and there is something I can do about it, especially if that person is my gay or trans brother or sister, it is my problem.

Dennis Mintun, 56, is incarcerated at the Idaho State Correctional Institution in Boise, Idaho, where he is serving a 45-year sentence for three counts of sexual abuse of a child under 16.