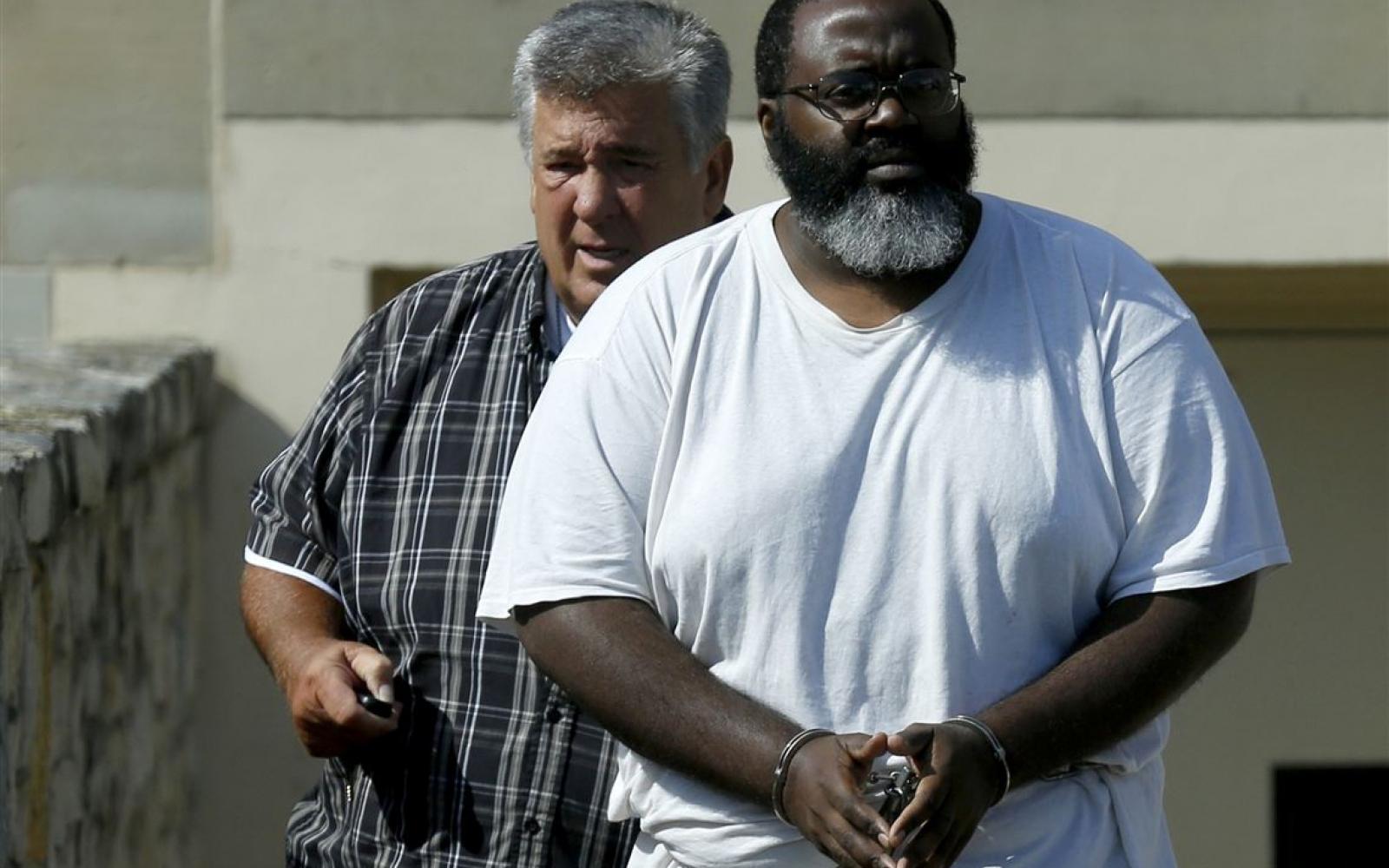 Court officials embraced a young woman as handcuffs clicked on a former Toledo pastor found guilty by a federal jury Wednesday on multiple sex-trafficking charges stemming back to 2014.

Anthony Haynes, 40, the former leader of Greater Life Christian Center, was found guilty of conspiracy to engage in sex-trafficking with a minor, sex-trafficking of a minor, sexual exploitation of a minor, and obstructing a sex-trafficking investigation after he groomed a then 14-year-old girl to have sex with him and pastors Kenneth Butler and Cordell Jenkins, who have previously pleaded guilty in connection to their cases.

The jury deliberated for less than three hours before returning the guilty verdicts. As they entered the courtroom for the verdicts to be read aloud, several members of the jury looked at the victim, who was standing in the front row of the courtroom gallery.

Haynes displayed no reaction to the verdicts.

Anthony Haynes is escorted out of the U.S. District Court in Toledo. A federal court judge on Thursday set a Sept. 5 trial date. Haynes, 39, is charged with child sex trafficking and production of child pornography, among other charges.

Federal prosecutors and other court staff — many of them crying — then hugged the victim, who glanced at Haynes as he was escorted out of the courtroom.

Assistant U.S. Attorney Michael Freeman said it was an emotional day, but it was also a relief that 12 strangers believed the victim.

“She’s doing great. She’s been carrying this burden with her since 2014 and now she feels relieved. She’ll be able to move on her with life and sleep well knowing that this weight is no longer on her,” he said.

Such cases are difficult cases to try, the federal prosecutor said.

“They resonate emotion in people. He was a pastor and a member of this community so there’s always some doubt. I never doubted the main victim in the case,” Mr. Freeman said.

The jury heard testimony from Haynes on Wednesday before hearing closing arguments from the prosecutors and the defense.

Haynes sobbed as he took the stand Wednesday, claiming he was manipulated by a teenage girl and he took the fall for sexual encounters between her and two other pastors.

While Mr. Haynes previously admitted to a friend and federal investigators during recorded conversations that he had sexual relations with the girl, Mr. Haynes took the stand Wednesday in U.S. District Court in Toledo and denied the allegations against him. He testified Wednesday he lied to federal investigators during his April, 2017, interview because he was “covering up for people,” and he was trying to protect his family.

“I was tired. People don’t know what I was dealing with. Outside looking in, I look like the biggest monster,” Haynes said.

“I’m not no freak, I’m not a pervert. I’m an innocent family man with flaws and issues and I’m trying to get back to my family and children,” he added before breaking down into tears.

On Wednesday, he said he never had sex with the girl or schemed with the other pastors to get her to have sex with them.

Haynes said the girl moved in with his family in 2014 after her mother could no longer provide adequate care for her or her siblings. He described the relationship with the Haynes family and the girl as nearly perfect at first, but it then changed.

The girl became jealous when Haynes would provide gifts or different activities for his children and not for her because he could not afford it, he testified. Haynes said the girl threatened to tell that he was molesting her if she did not receive some of the same items. Despite the threats, he continued to let her live in his home, he said.

Haynes had sex with her at his church, in his vehicle, at motels, and inside a storage area where he worked, prosecutors said. There were also photos of the girl performing oral sex on him saved on his phone, investigators said.

Ms. Sterling also showed Haynes a series of text messages between him and the girl, including ones referencing them having sex at the church and her being sore following the act.

After about a year and a half, the girl moved out of the Haynes’ home and began staying with a guardian who attended Abundant Life Ministries, led by Jenkins.

Ms. Sterling said Haynes asked the girl to send him nude photos so he could send them on to Jenkins. The “mission” was to get her to sleep with Jenkins, and the men reportedly had a meeting about the girl, the prosecutor said.

Jenkins and the girl later had sex at his church, his home, and a Red Roof Inn. Security footage from the hotel, cash withdrawals from banks, and text messages support these claims, prosecutors said.

Haynes testified he eventually closed his church because the “secrets” of Jenkins and Butler were becoming too much. He said he never reported the incident to police.

The girl’s guardian took her phone away one day, and she frantically tried to warn Haynes to delete all messages, Ms. Sterling said. The girl later disclosed the information to her school guidance counselor, which led to the federal investigation.

Prosecutors added the girl’s testimony remained consistent throughout the case and could be proven with multiple pieces of evidence from June, 2014, to April, 2017.

“Her words match perfectly with the evidence,” Mr. Freeman said.

Haynes’ attorney, Peter Wagner, said this case is only about his client and Mr. Haynes is presumed innocent until proven guilty. Mr. Wagner said prosecutors did not prove each and every element of the charges and his client must be found not guilty.

Earlier this week, prosecutors called a series of FBI agents involved in the case; the victim’s school guidance counselor; and a family friend who purchased her an iPhone for her 17th birthday.

Jenkins, Lloyd-Jenkins, and Butler have all entered pleas in connection to their role in the case and they will be sentenced at a later date.