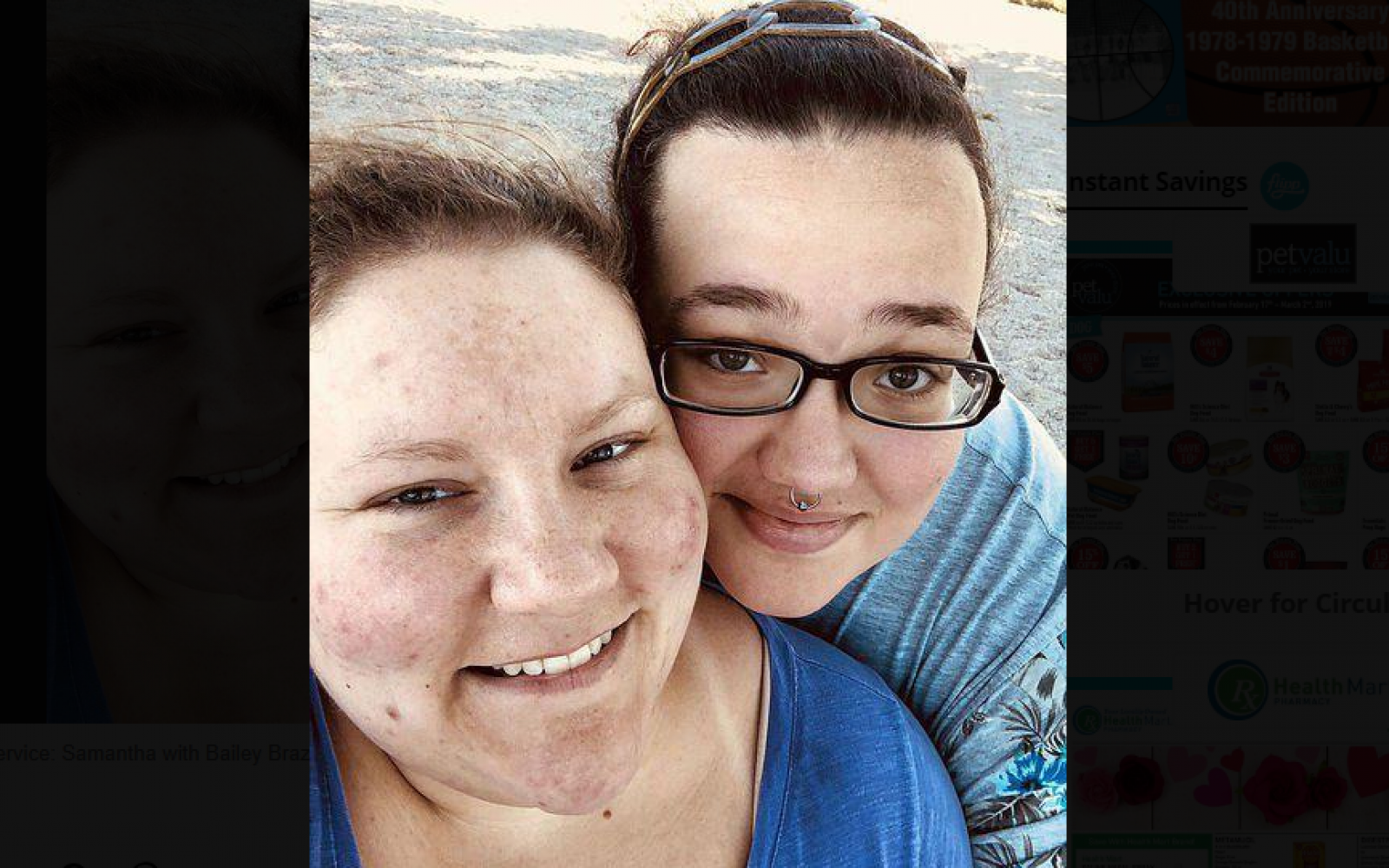 For the last four years, Bailey Brazzel has gone to Carver Tax Service in Russiaville to have her taxes done by Nancy Fivecoate, who runs the business.

That changed this year when Brazzel showed up with her wife, Samantha, on Tuesday. The two were married in Peru in July and were filing their taxes jointly for the first time.

When Fivecoate realized they were a gay married couple, she refused to do their taxes – civilly and matter-of-factly – citing her religious beliefs, and recommended another tax service business which would work with them.

“At first we thought she was kidding,” Brazzel said. “But when she started talking about the Bible, we knew she was serious – and I was completely shocked.”

Brazzel, who works at the FCA plant in Tipton, said she’s been openly gay for years and never felt discriminated against because of her sexual orientation. That held true after she married Samantha last year.

But that all changed on Tuesday.

“You hear about it all the time, but nothing like this has happened to us before,” Brazzel said. “She had done my taxes with no issues before, but now that we were married and she didn’t agree with my life choices, she wouldn’t.”

So the couple left, in shock.

“We were pretty upset,” Brazzel said. “My wife was trying to console me and I was crying.”

But for Fivecoate, she said she was simply sticking to her religious convictions.

“This year, [Brazzel] came with her wife and I declined to prepare the taxes because of my religious beliefs,” Fivecoate said in a  statement. “I am a Christian and I believe marriage is between one man and one woman. I was very respectful to them. I told them where I thought she might be able to get her taxes prepared.”

Fivecoate said she has other gay clients, and has no issues preparing their taxes. She said it becomes an issue when the couple is married.

“A few years ago, I had a couple of gay clients that married,” she said. “When it was time to prepare their taxes they called me and asked if I had a problem since they were married. I told them that as a Christian that I could not prepare their taxes. I thanked them for calling and wished them well.”

But for Brazzel’s father, William, who was with the couple on Tuesday during the incident, the decision boiled down to just one thing: discrimination.

“I told Nancy, ‘That’s flat out discrimination,’” he said. “I just think it’s wrong. I told her we all wake up and put on our pants the same way.”

In Kokomo, what Fivecoate did would have been considered discrimination and could have come with a fine up to $2,000. The city in 2016 approved legislation protecting lesbian, gay, bisexual and transgender citizens through the city’s human rights municipal code.

But denying a gay couple service is perfectly legal in parts of Indiana that haven’t passed ordinances specifically protecting people who are LGBT. That includes Russiaville and Howard County.

Indiana law makes it illegal to deny services to people based on their race, color, national origin, ancestry, religion, sex, familial status (having children under 18) and disability – but not sexual orientation.

Steve Sanders, an associate professor of law at Indiana University’s Maurer School of Law, said the state’s lack of LGBT protections has led to a glaring incongruity.

Since 2015, gay couples have been able to legally marry anywhere in the country following a decision by the U.S. Supreme Court. But it’s still legal to deny those couples services because of their sexual orientation in Indiana – and more than half of other states.

Sanders called it an “odd anomaly” that leaves gay couples, who feel discriminated against, powerless to do anything to defend themselves.

“The only recourse is good-old fashioned shaming – going on Facebook and telling their friends this is a discriminatory business and people might want to think twice about visiting,” he said.

Most major metropolitan areas in Indiana have approved legislation protecting residents based on their sexual orientation, including Indianapolis, Fort Wayne, Bloomington and South Bend.

But in most rural areas of the state, along with smaller cities and towns, those protections don’t exist.

For Brazzel, being denied service anywhere in Indiana because she’s married to a woman just doesn’t make sense.

“For me, it’s one thing to have an opinion,” she said. “I don’t need you to agree with me, but you should be respectful of other people’s decisions. What do taxes have to do with my marriage?”

For her father, William, denying gay couples services seems like a slippery slope that could put his daughter and daughter-in-law in danger.

“What’s next? Are they going to be discriminated against when they go to the grocery store and want to buy food? Where’s it going to stop?” he said.

“The LGBT want respect for their beliefs, which I give them,” Fivecoate said. “I did not say anything about their lifestyle. That is their choice. It is not my choice. Where is their respect for my beliefs?”

Last year, a similar case in Colorado in which a baker refused to make a cake celebrating a gay marriage made it all the way to the Supreme Court, which ruled in the baker’s favor. However, the court’s ruling only narrowly applied to the Colorado case and left broader questions on religious liberties unsettled.

And until courts decisively decide the question, or Indiana adds protections for LGBT people, companies and businesses can continue to deny services to couples like Bailey and Samantha Brazzel, said law professor Sanders.

“There is nothing in Indiana law that protects the couple in this case,” he said. “Basically, [Fivecoate] is free to turn them away if she wants to.”