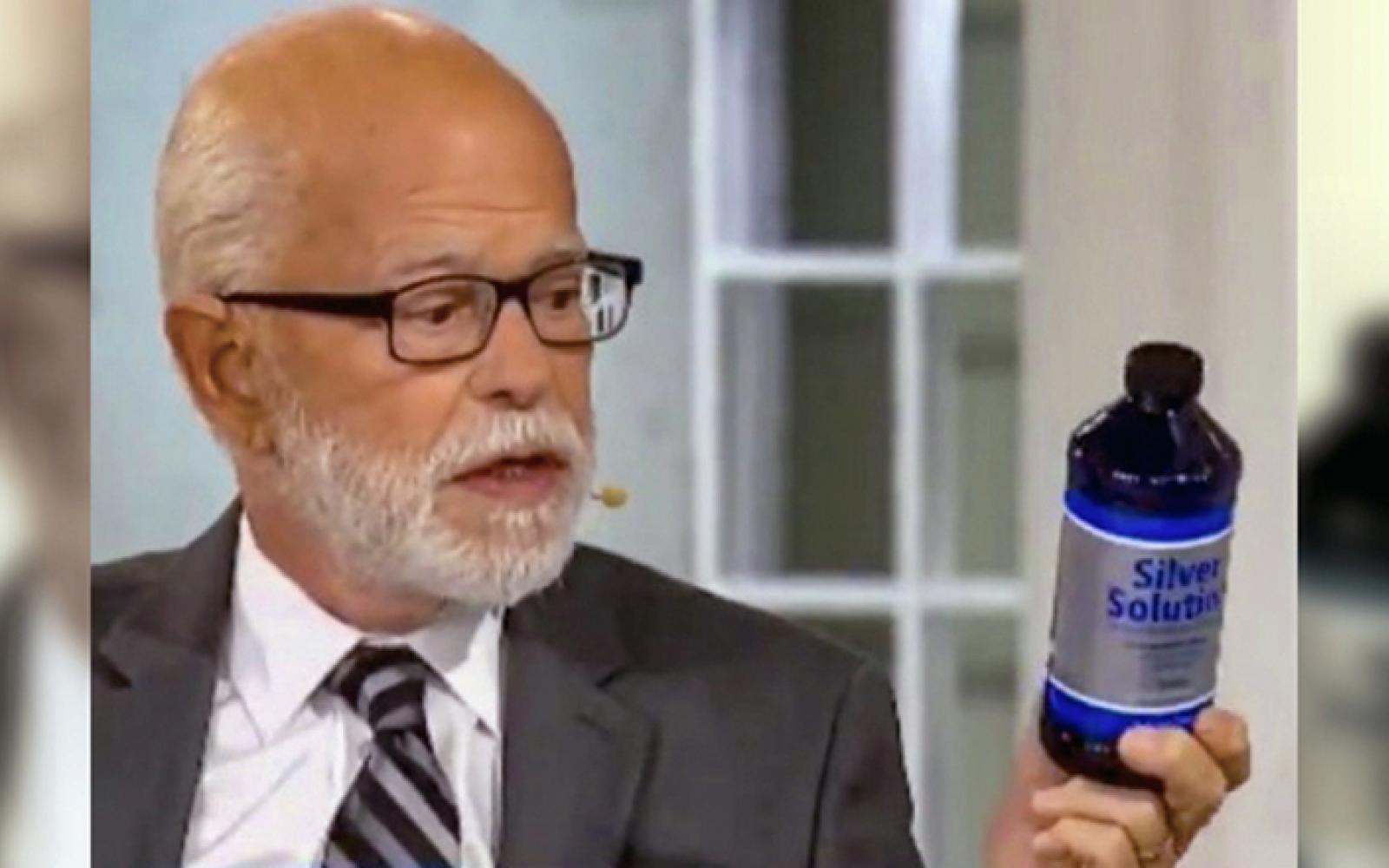 Televangelist Jim Bakker held up a blue and silver bottle, gazing intently at the label, as he questioned the woman sitting next to him.

"This influenza that is now circling the globe," Bakker said on the Feb. 12 broadcast of The Jim Bakker Show, "you're saying that Silver Solution would be effective."

His guest, the so-called "natural health expert" Sherrill Sellman, falsely implied that the liquid would likely be effective. The coronavirus impacting more than 120,000 people worldwide does not yet have a known treatment or cure.

Silver Solution "has been proven by the government that it has the ability to kill every pathogen it has ever been tested on, including SARS and HIV," Sellman continued. Four 4-ounce bottles could be yours, a message on the screen said, for just $80.

Selling a fake "treatment" for the COVID-19 disease violates state and federal law. On Tuesday, the state of Missouri filed a lawsuit against Bakker and his production company to stop them from advertising or selling Silver Solution and related products as treatments for the coronavirus.

Bakker and Morningside Church Productions have violated Missouri law by "falsely promising to consumers that Silver Solution can cure, eliminate, kill or deactivate coronavirus and/or boost elderly consumers' immune system and help keep them healthy when there is, in fact, no vaccine, pill, potion or other product available to treat or cure coronavirus disease 2019," the Missouri Attorney General's Office wrote in its application for a temporary restraining order. Bakker and his company are based in the state.

Bakker gained fame in the 1970s and '80s as the host of The PTL Club, a Christian television program he hosted with his then-wife, Tammy Faye. He stepped down from PTL after a sex scandal and later spent several years in prison after a jury found that he had defrauded his viewers out of millions of dollars.

Missouri is the first state to file a lawsuit against Bakker for selling his coronavirus "treatment," but others have also been warning him to stop peddling his snake oil. On March 3, the New York Attorney General's Office sent a cease-and-desist letter to Bakker, accusing him of defrauding the public.

"Your show's segment may mislead consumers as to the effectiveness of the Silver Solution product in protecting against the current outbreak," wrote Lisa Landau, chief of the New York Attorney General's Office's health care bureau. The World Health Organization "has noted that there is no specific medicine to prevent or treat this disease," the letter said. It gave Bakker 10 business days to comply or face legal action.

A few days after New York's letter, the U.S. Food and Drug Administration and the Federal Trade Commission warned Bakker that his website and Facebook page were selling "unapproved new drugs" in violation of the law.

By Wednesday, Bakker's website was no longer selling the solution. Bakker's production company did not respond to a request for comment. A spokesman for the Missouri Attorney General's Office told NPR that even though Silver Solution is no longer being sold, the office would continue seeking the temporary restraining order. "That way they can't come back in months or years and start selling solution as a miracle cure again," the attorney general's press secretary, Chris Nuelle, said.

Bakker's solution did not escape the attention of late-night comedians. "That is ridiculous," John Oliver said on Last Week Tonight. "Silver does not kill coronavirus. Silver kills werewolves. Which means first you need to get your coronavirus bitten by a microscopic werewolf." Oliver then offered his "Premium Werewolf Solution" for $49.99 per bottle, which he promised contained "millions of microscopic werewolves."

In addition to The Jim Bakker Show, the FDA sent warnings on Monday to six other companies that were selling colloidal silver, teas, tinctures or essential oils as treatments for the coronavirus. "There already is a high level of anxiety over the potential spread of coronavirus," said FTC Chairman Joe Simons. "What we don't need in this situation are companies preying on consumers by promoting products with fraudulent prevention and treatment claims."