Oprah Winfrey has debuted the first trailer for the new Oprah Winfrey Network (OWN) series David Makes Man, which debuts this summer.

The trailer first debuted at the Sundance Film Festival, where star Phylicia Rashad and executive producer Michael B. Jordan took part in a Q&A, and later surfaced on OWN YouTube.

On Wednesday, the 65-year-old media mogul took to her own Instagram to debut the video in two parts, along with a special message for fans.

'I’m so excited to share with you the first look at our new scripted drama #DavidMakesMan,' Oprah began.

'I knew as soon as I heard the pitch from @ocatarell_again (series creator Tarell Alvin McCraney) that this was something that the world needed to see,' she concluded.

David Makes Man is the first TV series for McCraney, who won an Academy Award for co-writing 2017 Best Picture winner Moonlight, based on his play In Moonlight Black Boys Look Blue.

The trailer opens with a distraught young David (Akili McDowell) being told that he's, 'not regular' and that 'people need to see your eyes' and he doesn't have time to, 'be anyone else's cheerleader.'

Set to Laura Mvula's Sing to the Moon, the trailer shows David arriving at his private school, putting on a good fake smile before he's seen in a class taught by Dr. Woods-Trap (Phylicia Rashad), who asks, 'What is your story?'

The trailer features a number of other seemingly random scenes, including David shedding a single tear with his mother, along with glimpses at his home life in the South Florida projects that is much different than his school life.

The footage also shows an arrest being made outside David's housing project, with David saying, 'I'm from the hood,' while further showcasing the duality of his different lives.

'I come from water,' he says, with different depictions of water from both his home and school, before adding, 'I come from runners' and 'I come from laughter.'

The trailer ends with with a determined David in a field, who simply states, 'I'm not nothing.'

The series is inspired by events in McCraney's own life, as was his hit movie Moonlight, which explores, childhood trauma and the power of imagination to survive.'

The series creator also serves as an executive producer alongside Winfrey, Jordan and Dee Harris-Lawrence, who serves as the showrunner. 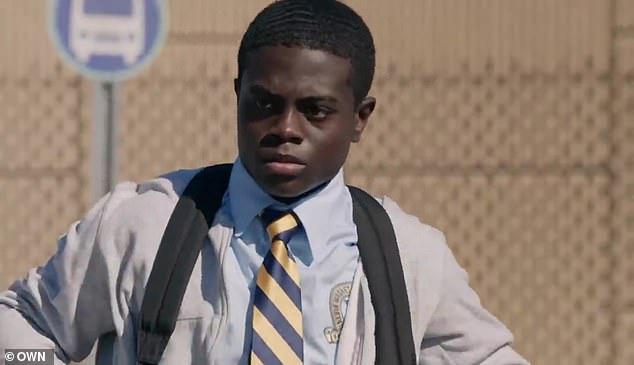