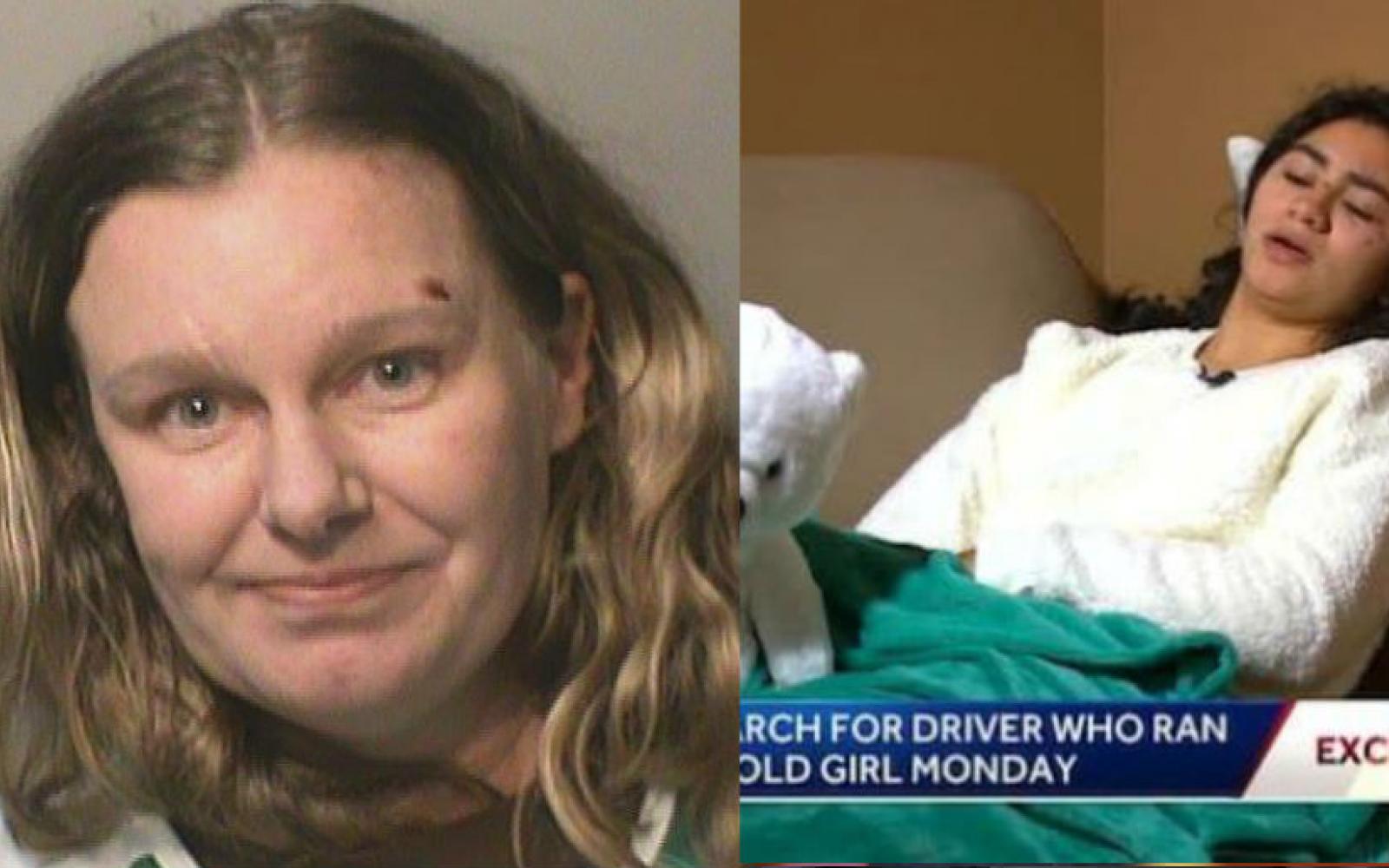 A Des Moines woman smoked methamphetamine hours before intentionally hitting a 14-year-old central Iowa girl with her SUV this month, according to court documents.

She now faces an attempted murder charge and a number of other charges from a racially-charged incident that occurred 15 minutes later.

Community members are calling for Franklin, 42, to be charged with a hate crime because she admitted targeting the girl because of race. Authorities aren't ruling that out.

Natalia Miranda, 14, was struck by a vehicle just before 5 p.m. on Dec. 9, she told police. She was walking on a sidewalk in the 9200 block of Indian Hills Drive on her way to Indian Hills Junior High School in Clive, court records show.

Miranda suffered several injuries, but the driver did not stop to help her.

Franklin was charged with attempted murder Friday after police linked her to the hit and run, police said. Her bond was set at $1 million.

She admitted to police Thursday that she intentionally hit Miranda because the girl was Hispanic, according to a criminal complaint filed Friday.

Venema said at Friday's news conference that there's no evidence at this time to indicate Franklin's decision to hit the girl was premeditated. But, he added, hate crime charges are being considered.

Miranda told KCCI last week that she remembers the vehicle coming toward her, but she doesn't remember being hit.

"I was in the hospital and I tried moving, and I couldn't get out of my bed," Miranda, who was badly bruised and suffered a concussion, told the TV station. "Sitting up was the worst pain I've ever felt."

West Des Moines Community Schools superintendent Lisa Remy released a statement Friday that counselors, teachers and administrators are on hand to support all students today and in the months to come.

“As she continues to physically improve we understand the emotional impact of this incident will remain long after her body heals,” Remy said of Miranda, who returned to school a week after the incident.

Venema said the police department extended support to the family, which was shocked to learn the incident was targeted.

"We spent a great deal of time with our victim's parents last night and made sure that they understood that their family had a support network in place," he said.

Less than an hour after Miranda was struck, police at 5:15 p.m. were called to the Conoco gas station in the 100 block of 1st Street in West Des Moines for a woman creating a disturbance and using racial slurs, court records show.

Kevin Reed, 53, said he was checking out at the gas station when he saw Franklin throwing potato chips, destroying merchandise and calling people names. He said Franklin appeared to be "on something."

Waheed Abdul, 57, co-owns the Conoco with his brother. He wasn't working the day of Franklin's arrest but said surveillance footage showed Franklin targeting his brother with racial slurs.

Abdul said the footage from Dec. 9 showed Franklin in the store for more than 20 minutes. He said she pocketed a container of ice cream and threw items from the counter at his brother, whom police said was not injured in the incident.

Some of the store's customers, including Reed, stayed with Abdul's brother until police arrived out of fear that Franklin would injure him, he said.

Franklin told responding officers that she was under the influence of drugs, records indicate. Police said she "was fidgety and had dilated pupils consistent with drug use."

In February 2018, Franklin was charged with harassment and domestic abuse assault after she bit her boyfriend and threw something that struck him in the back of the neck, according to a criminal complaint. During the confrontation, Franklin picked up a butcher’s knife and repeatedly said she would kill her boyfriend, the complaint said.

Her boyfriend told police she was off her medicine, but Franklin told police that she was not in any mental state that needed medication.

"Shocked would be an understatement," Venema, the Clive police chief, said Friday of Franklin admitting to targeting the teen because of her race. "I've been in law enforcement for 35 years, and I get very used to people being a little bit callous or maybe leaving the scene of an accident and not caring about someone who's been hurt if they did so unintentionally."

Joe Gonzalez, executive director of Latino Resources in Des Moines, said he's been contacted by people asking why a hate crime charge hasn't yet been filed.

He said it's unfortunate that there are people who characterize all Latinos as bad.

"People don’t realize the contributions they have made to our city, state and country," Gonzalez said. "When things happen, nobody wants to be lumped in a group. … There are people who do bad things, but you can’t lump everybody together."

Joe Henry, president of the League of United Latin American Citizens Council No. 307 in Des Moines, said hate crimes and racist attacks have been on the rise in Iowa since President Donald Trump was elected.

“It’s terrible. I think this can all be tracked back to Trump,” he said. “People don’t just do this.”

Henry said he hoped that the principal at Indian Hills Junior High School, where the girl was going when she was struck, would talk with students about racism and try to educate them about the dangers of white supremacy.

“We’re concerned about the impact this is having on our young people," he said. "It’s just never-ending. It’s ongoing, and we know what it goes back to.”

Last year, as a debate over immigration erupted when an undocumented worker was charged in the death of Iowa college student Mollie Tibbetts, LULAC helped fund billboards promoting unity and diversity.

“We’ve always been a state of diversity, and it’s something we’ve been encouraging the governor and city councils to talk more about,” Henry said.

Nationally, Latinos have experienced an increase in hate-motivated violent incidents, but prosecutions of hate crimes are rare in Iowa, FBI crime statistics show.

A California State University study released this fall by the Center for the Study of Hate and Extremism shows person-directed hate crimes rose to a 16-year high of 4,571 last year, accounting for 61% of all 2018 hate crimes.

For Latinos, those crimes have risen 13% over one year and 48% over five years, according to the analysis of FBI crime stats.

On Friday, the Council on American-Islamic Relations also called for hate crime charges to be filed against Franklin.