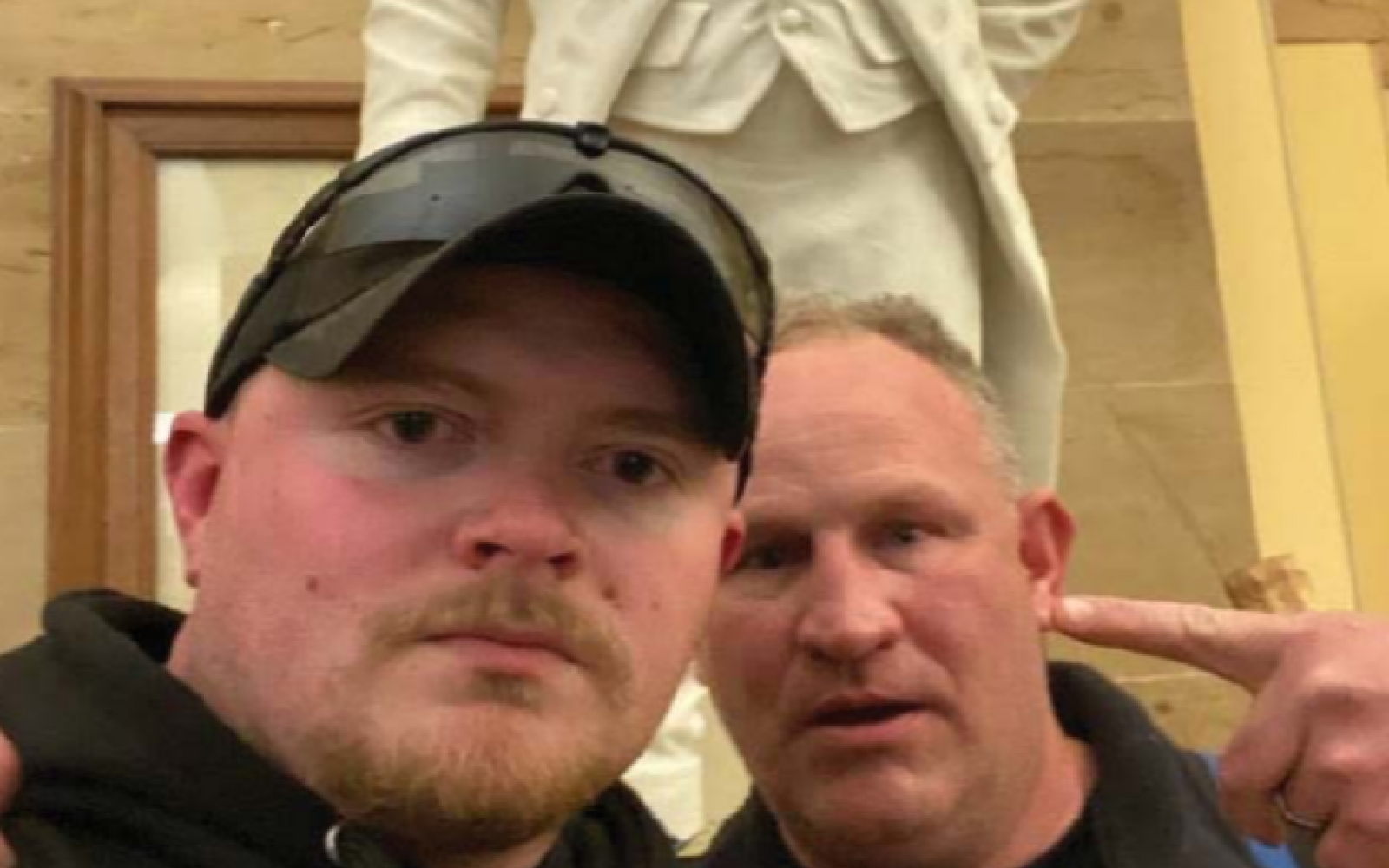 Two police officers in Rocky Mount, Virginia are facing federal charges in the January 6 storming of the U.S. Capitol. Sergeant Thomas Robertson and Officer Jacob Fracker have been charged with unlawful entry into a restricted area and violent entry and disorderly conduct on Capitol grounds.

According to a criminal complaint, Robertson and Fracker were photographed inside the Capitol building in front of a statue, with one seen pointing and the other making an obscene gesture. At the time of the riot, the two were off-duty from their jobs as police officers with the Rocky Mount Police Department, the complaint says.

The photo was shared initially only with other members of the Rocky Mount Police Department, but Robertson re-posted it to his own Facebook account after others shared the photo on social media, according to the complaint. In a comment on social media, Robertson allegedly said he was "proud" of the photo because it showed he and Fracker were "willing to put skin in the game," the complaint said.

A Facebook post by Fracker that has since been deleted allegedly read: "Lol to anyone who's possibly concerned about the picture of me going around... Sorry I hate freedom? …Not like I did anything illegal…y'all do what you feel you need to…"

Both officers have been placed on administrative leave as town officials investigate, according to CBS affiliate WDBJ. The police department notified federal authorities, the station said.

Robertson told the station he and Fracker were at the back of the Capitol building and did not see any rioting, violence or tear gas.

"We were allowed by Capitol police to be where we were and were given water bottles and told where we could go and where we couldn't," Robertson told the station.

The complaint makes note of Robertson's claims to the media that he did not engage in violence and was escorted by Capitol police, but it points to another social media post by Robertson that read: "CNN and the Left are just mad because we actually attacked the government who is the problem and not some random small business ... The right IN ONE DAY took the f***** U.S. Capitol. Keep poking us."

"Robertson made these claims notwithstanding his previous posts that he had "attacked the government" and "took the f**** Capitol," the complaint read. "Moreover, at that date and time, the United States Capitol was on lockdown and the defendants' presence inside was without lawful authority."

Acevedo said he expects that federal charges are forthcoming.

More than 70 people are already facing federal and local charges in the January 6 assault that left five dead. Hundreds more charges are expected as federal investigators comb tips, video and social media to identify and arrest suspects across the country. Those already charged face a variety of counts including unlawful entry, disorderly conduct, theft, assault and weapons violations. A team of senior federal prosecutors are investigating more serious charges including sedition and conspiracy related to the "most heinous" acts at the Capitol, acting U.S. Attorney for the District of Columbia Michael Sherwin said Tuesday.