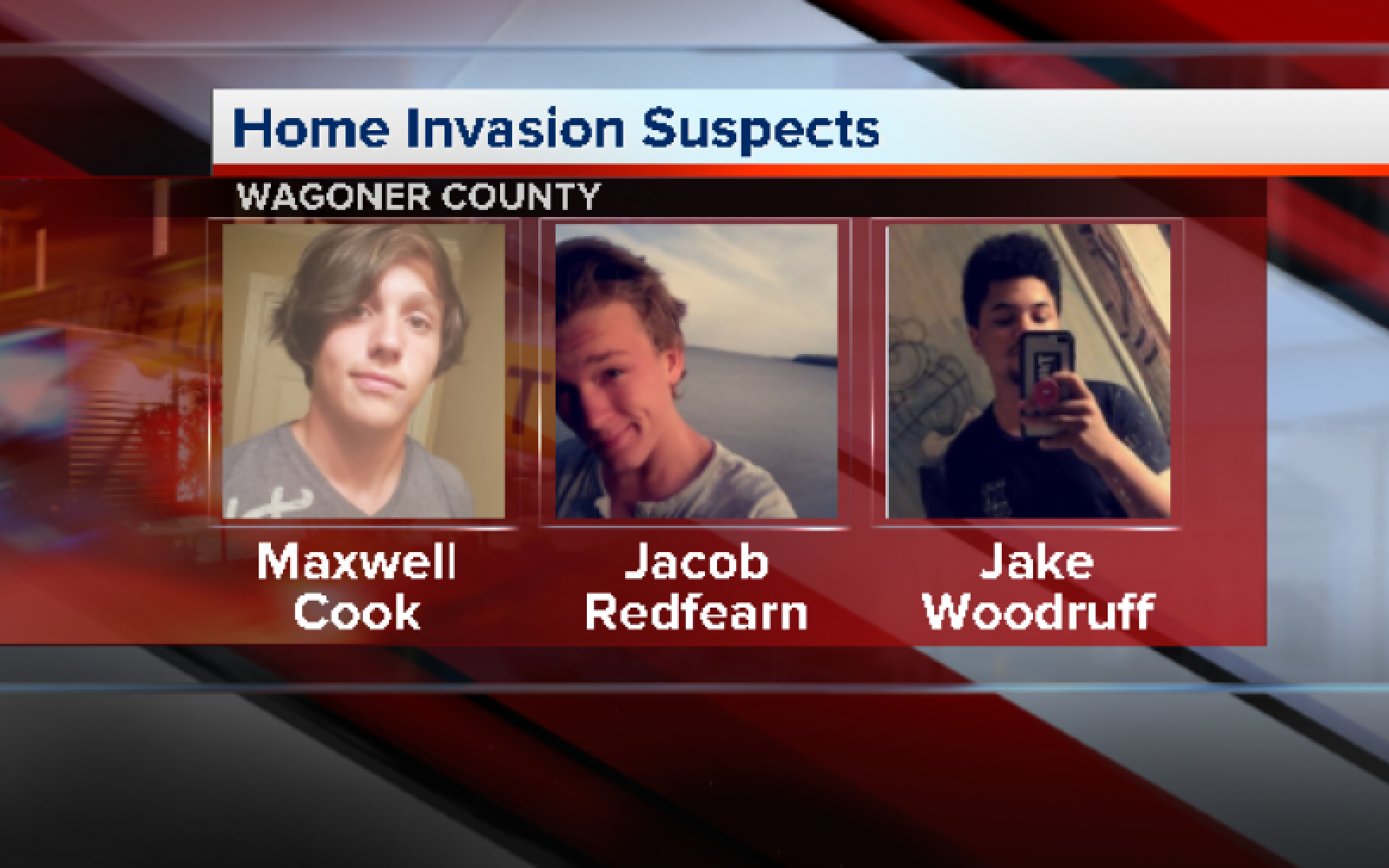 "They were dressed in black, all had masks on, and all had gloves on," said Nick Mahoney of Wagoner County Sheriffs Office.

The intruders, authorities say, broke into the rear of the home and were met by an the armed 23-year-old son of the homeowner.

"There was a short exchange of words and then gunfire happened," Mahoney said.

The shots were so loud, a neighbor down the road thought a storm was kicking up.

"Well, I thought it was thunder. I just heard something. I had the doors closed," Leon Simmons said.

Residents say the neighborhood recently had a rash of break-ins.

"Within the past six months ,we've had two or three burglaries out here," Simmons said.

Both of the people who were home at the time of the break-in, a father and his adult son, were uninjured.

Shortly before 12:30 p.m. on Monday, authorities say three teenagers dressed in black and wearing masks and gloves broke in to a Broken Arrow home through a back door.

However, they did not know that a young man was home at the time.

Officials say the homeowner’s 23-year-old son killed all three teens with an AR-15 before barricading himself inside his bedroom.

One of the alleged suspects was found to have a knife, while another was carrying brass knuckles.

Rodriguez was supposed to be the getaway driver, but investigators say she fled the scene after hearing gunshots.

If someone dies in the commission of a felony, Oklahoma law allows all suspects to be charged with murder, even if they did not actually kill anyone.

According to the Tulsa World, Rodriguez told authorities she planned the burglary of the home and dropped off the three teens and waited outside while they entered the home.

As soon as the teens broke a glass door to enter the home, the 23-year-old resident grabbed his gun and opened fire on the intruders.

Rodriguez later turned herself into police, saying that she had information about the burglary.

Although Mahoney said it did not appear the residents and intruders knew each other, Rodriguez told authorities knew the homeowner by name and had knowledge of the house.

According to the Tulsa World, Rodriguez said that she did not know the 23-year-old victim who was home at the time of the intrusion, but she does know his father, who also lives in the home.

The woman said that she planned the burglary because she knew the family had money and expensive belongings.

Mahoney told the Tulsa World that Rodriguez and the three teens had broken into a spare room in the home earlier in the day and returned later to search the rest of the home.

On Wednesday, the Broken Arrow Police Department released the 911 call made by the homeowner’s son.