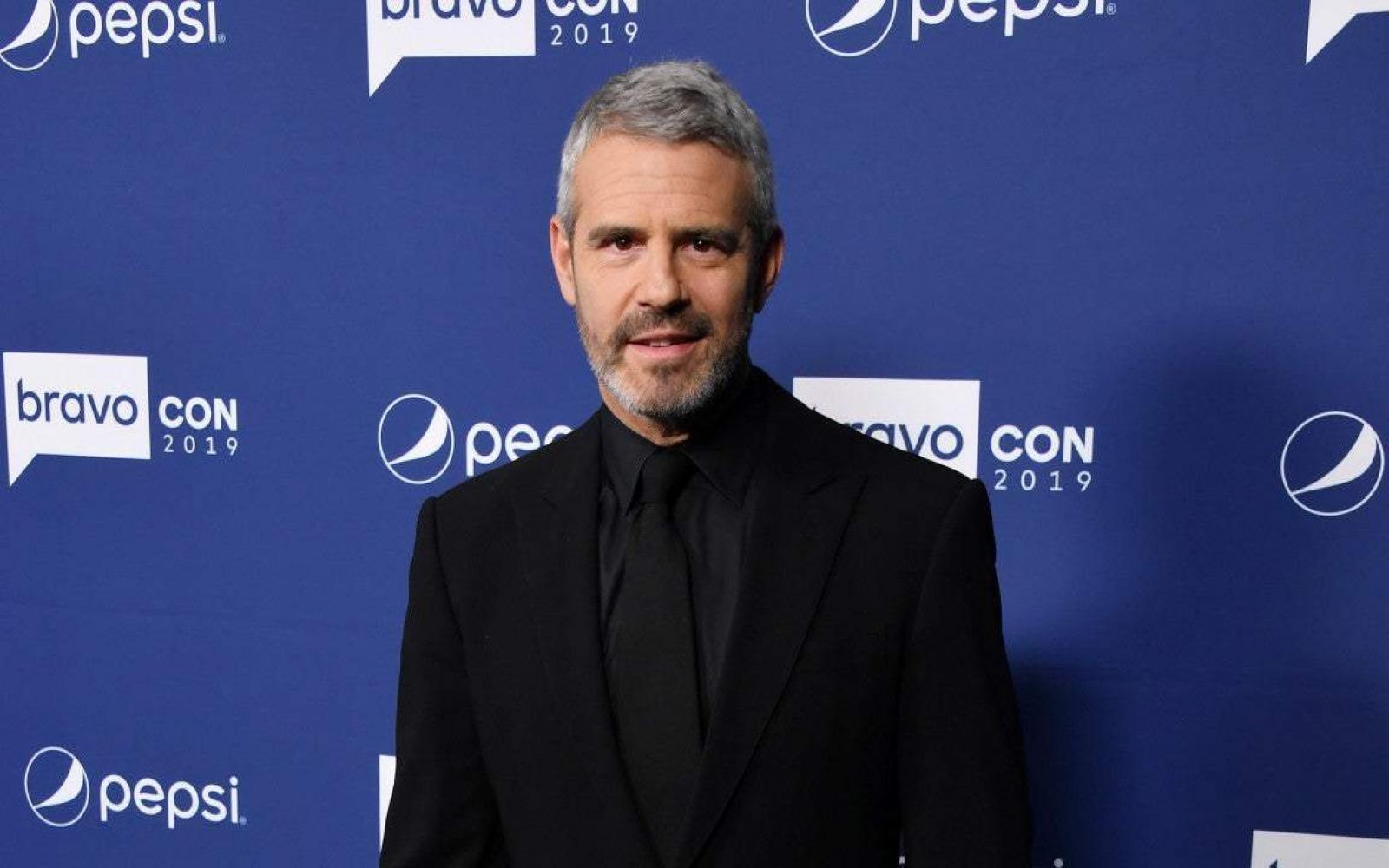 In a now-deleted Instagram post from August 26, former Real Housewives of New Jersey star Danielle Staub slammed Andy Cohen, claiming that he caused a lot of pain for her and her children.

“I am no longer forced to walk into the Lions Den,” Staub wrote in the now-deleted Instagram post, as noted by Us Weekly. “Andy kept me In the dark long enough! He has taken whats mine and given it to others! Now that you are a parent I’d hoped you would see some of the pain you caused my family, even when I left the show to protect my young children, you mocked me repeatedly defaming me and yet I still continued to give you over a decade to do right by me and mine!”

Staub continued, as noted by Us Weekly, “Now it’s time you understand that ‘for every action there is a reaction.’ You must’ve seen this coming and YOU know you were wrong, yet you continued. So for all the times you held me down and picked me apart instead of building me up and standing with me, for all the times you made me stand alone ‘kept me in the dark,’ may you tread lightly in your own darkness. ‘For letting me be the last to know’ may you learn to do better.”

Staub was a member of The Real Housewives of New Jersey during seasons one and two. Later, she returned as a friend of the cast during seasons eight, nine, and ten.

On August 26, Staub also released a new episode of her podcast, Absolutely Danielle. The episode is titled, “The Last To Know,” which is all about Cohen. During the episode, Staub revealed some pretty juicy secrets about Cohen. Staub claimed that Cohen went on three to four Grindr dates per night. “Is Andy ready for his son to know who he is? Because the Andy I know would hit up Grindr and go on three or four Grindr dates an evening.” Staub said during the podcast episode, as noted by Reality Tea.

Staub also called out Cohen for alleged drug use. “I just don’t, I don’t even want to talk about the drugs and the partying, not now anyway, but we can get back to that,” Staub said on the podcast, as noted by Reality Tea. “I can accuse him all I want and I’m not talking about marijuana. I’m not talking about legalizing.” 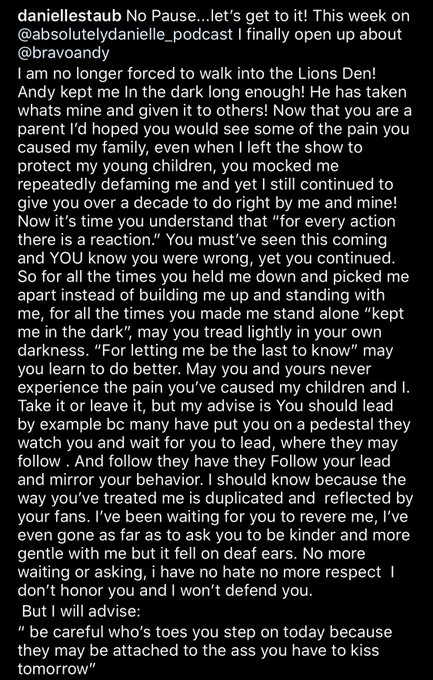 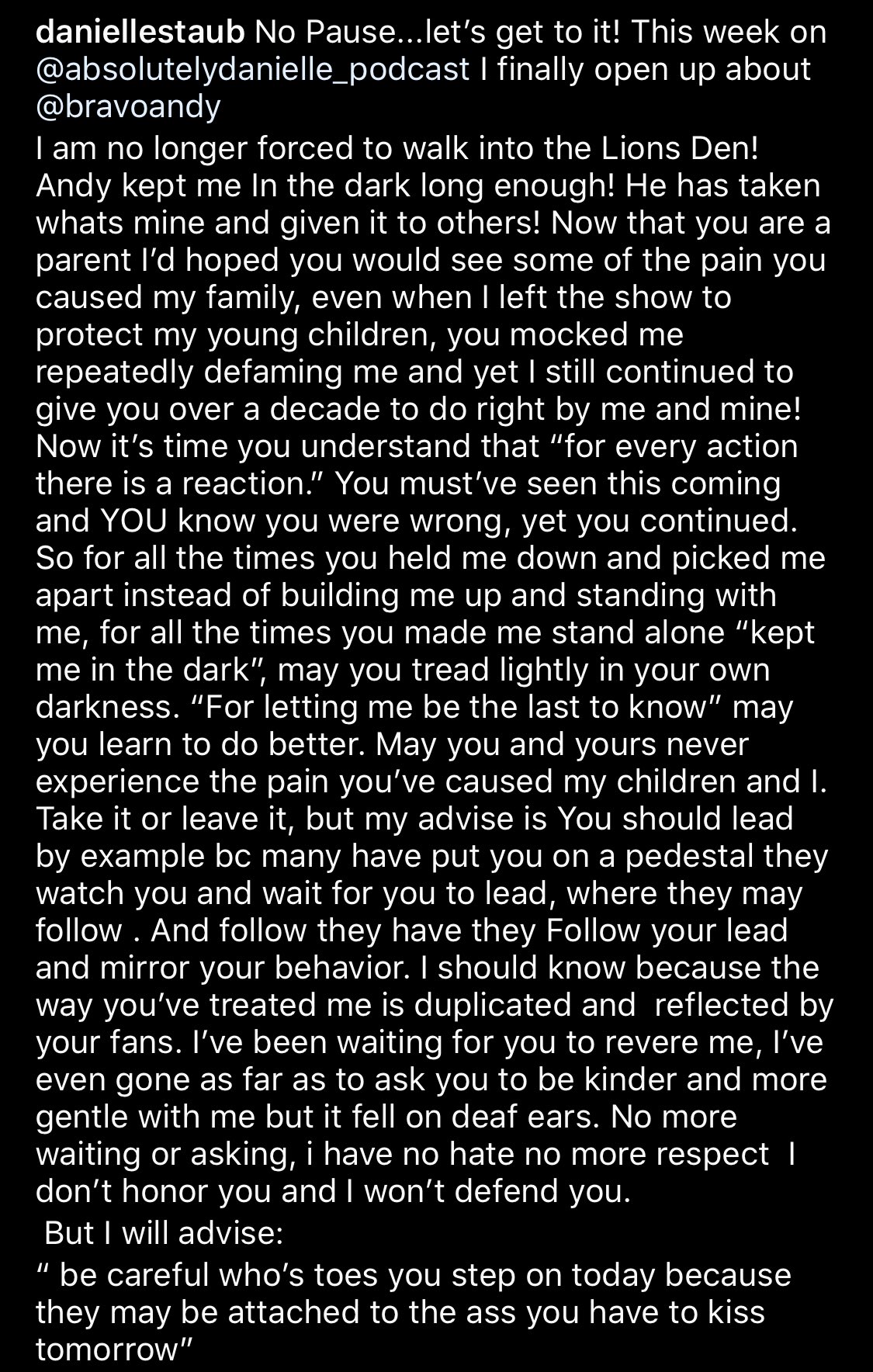