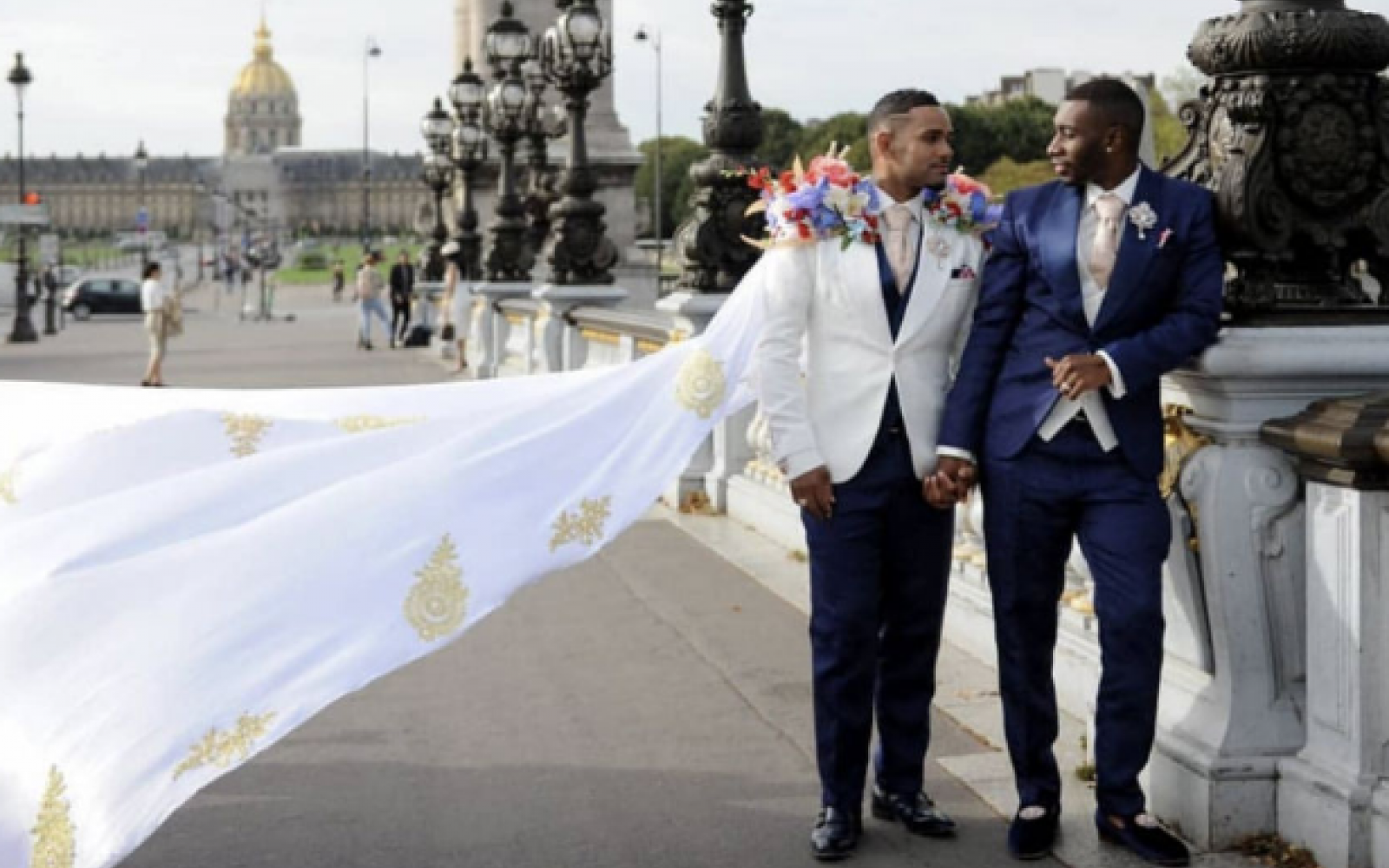 Riccardo and James Burrell-Hinds got married last week in France. On Tuesday, a niece of James’ posted images of their celebrations to Twitter. The two men are pictured in front of the Eiffel Tower, on a bridge across the Seine, and on the steps leading to the Petit Palais art museum.Riccardo, 30 is wearing a suit, while James, 36, wears a cape and long train – an eye-catching choice for a bridegroom.

‘My uncle got married in Paris and the wedding pictures are absolutely gorgeous and fabulous, I just had to share!’ said the niece, Camille.

My uncle got married in Paris and the wedding pictures are absolutely gorgeous and fabulous, I just had to share! pic.twitter.com/vR8pRtsKtX

The tweet has been liked over 130,000 times and retweeted over 36,000 times. It has prompted hundreds of comments.

Asked about the first time they met, James told us: ‘It was definitely fate. I had just made an escape from LA in July of 2015, leaving behind a bad relationship and made my way to Houston.

‘I had no plans of dating again anytime soon or even meeting anyone because of what I had endured the past two years.’

James said he just planned on enjoying life as a single man.

That all changed after about a month in Houston when I went out to a bar called Bayou City. I had been there a few times, but had never noticed Riccardo behind the bar until that night. I went to him for my drink and there was an instant spark.

‘We began hanging out as friends and tried very hard to keep it that way because of my previous situation, but we quickly realized how much we had in common and enjoyed each others company and we just couldn’t help falling in love.’

Why did the men choose Paris for their marriage?

‘We chose Paris because of all the beauty and grand historical monuments. Getting married in Paris is something that people only dream about and we made our dream come true. We planned it all by ourselves in less than five months.’

And what about James’ eye-catching wedding attire?

‘I chose to wear the cape because I’ve always been a bit extra and dramatic. Alexis Gabrielle Sherrington who constructed the cape is also very known to be over the top with her designs and Riccardo does the custom design work on all of my fashion, so I knew it would be exactly what I envisioned and I wanted to make sure we looked like royalty and made people go WOW!

We had so many people during the wedding and the photoshoot pass by and look in amazement. Random people were snapping pictures and so many people asked us to take photos with them which I’m sure are floating all over the internet.’

The men say they were very shocked by how their niece’s tweet went viral.

‘We were very surprised by how viral Camille’s post went. We had no idea it had blown up and I didn’t even know she posted it until she messaged me.

‘Neither one of us were big Twitter users so we didn’t know how quickly things spread on there. We’ve gone places and people we barely know have been walking up to us telling us that they’ve seen our pictures which is amazing! I’m so thankful that she made the post so that our love could be shared with the rest of the world.’ 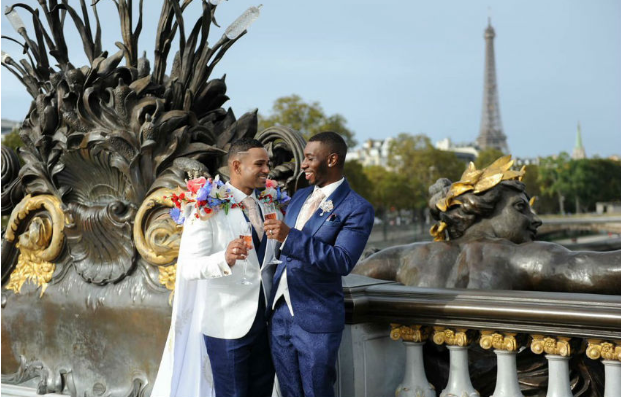 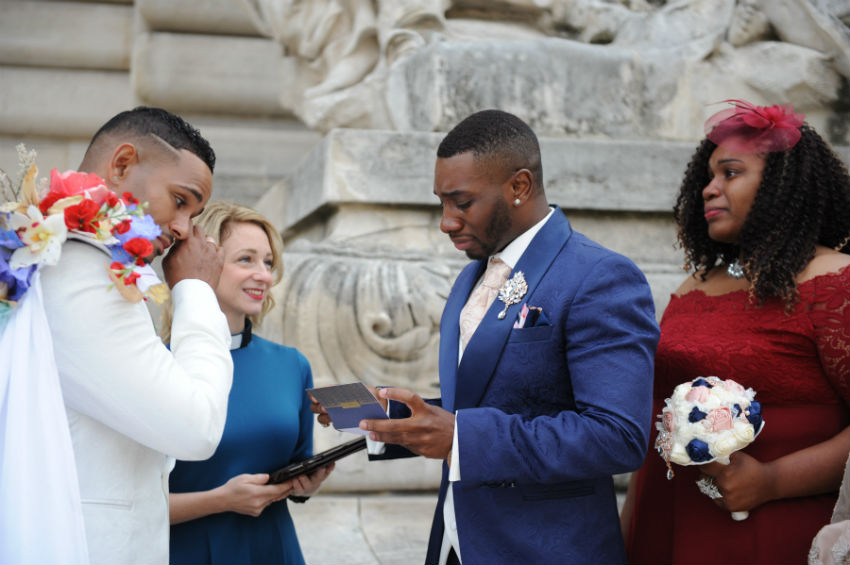 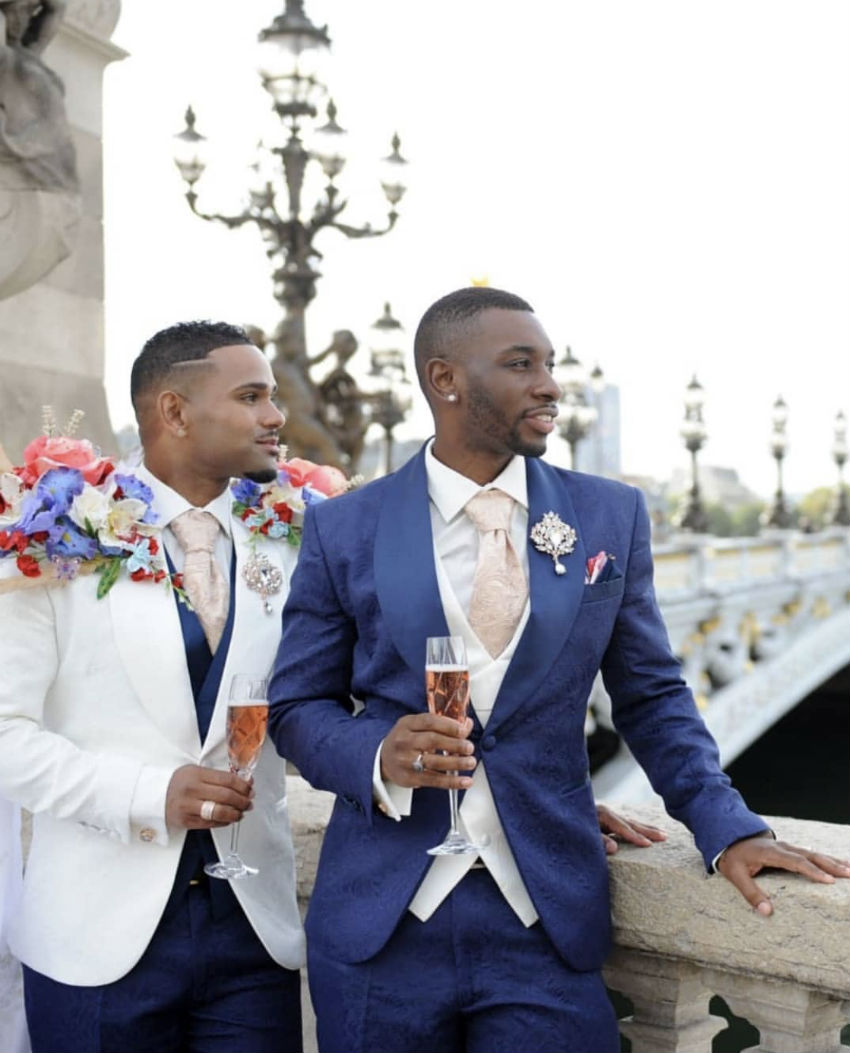 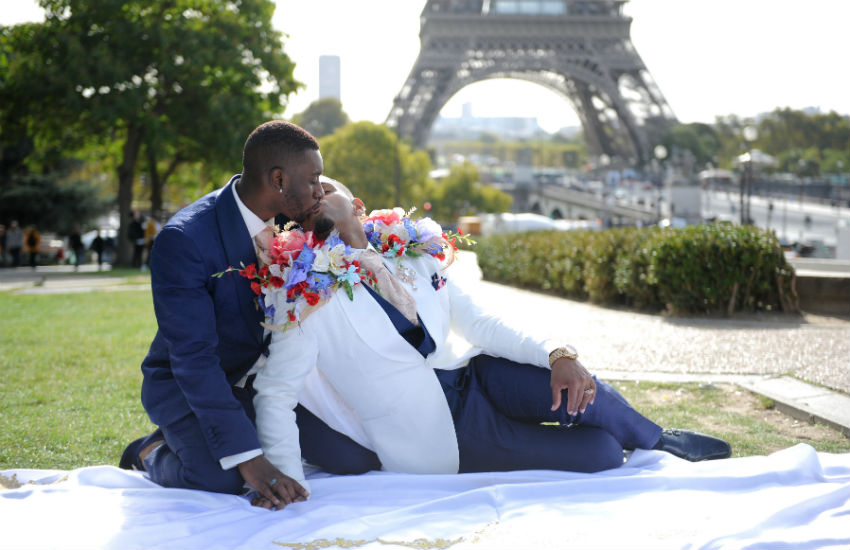 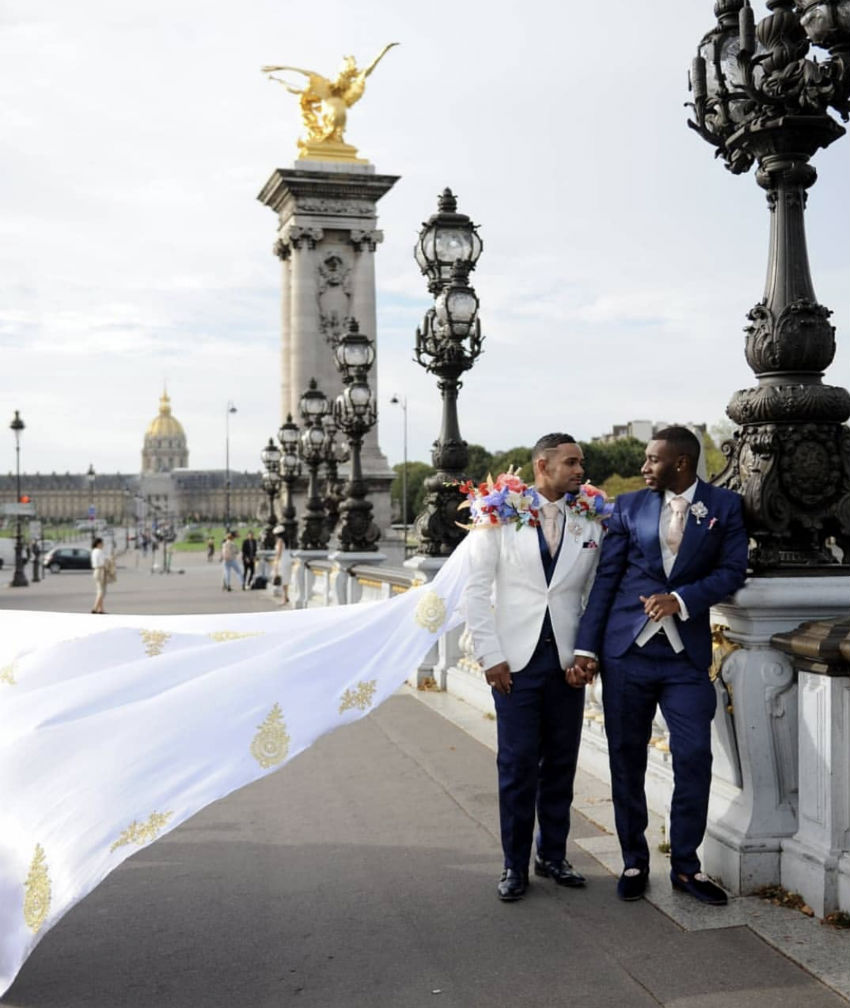 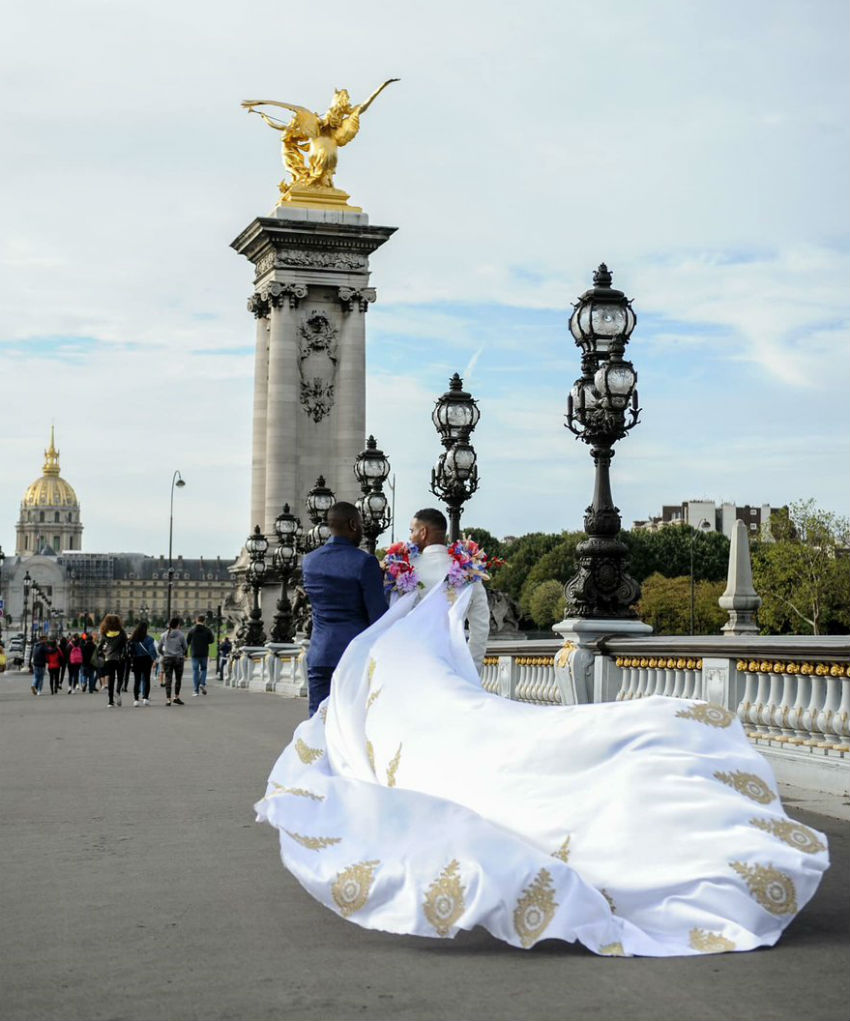 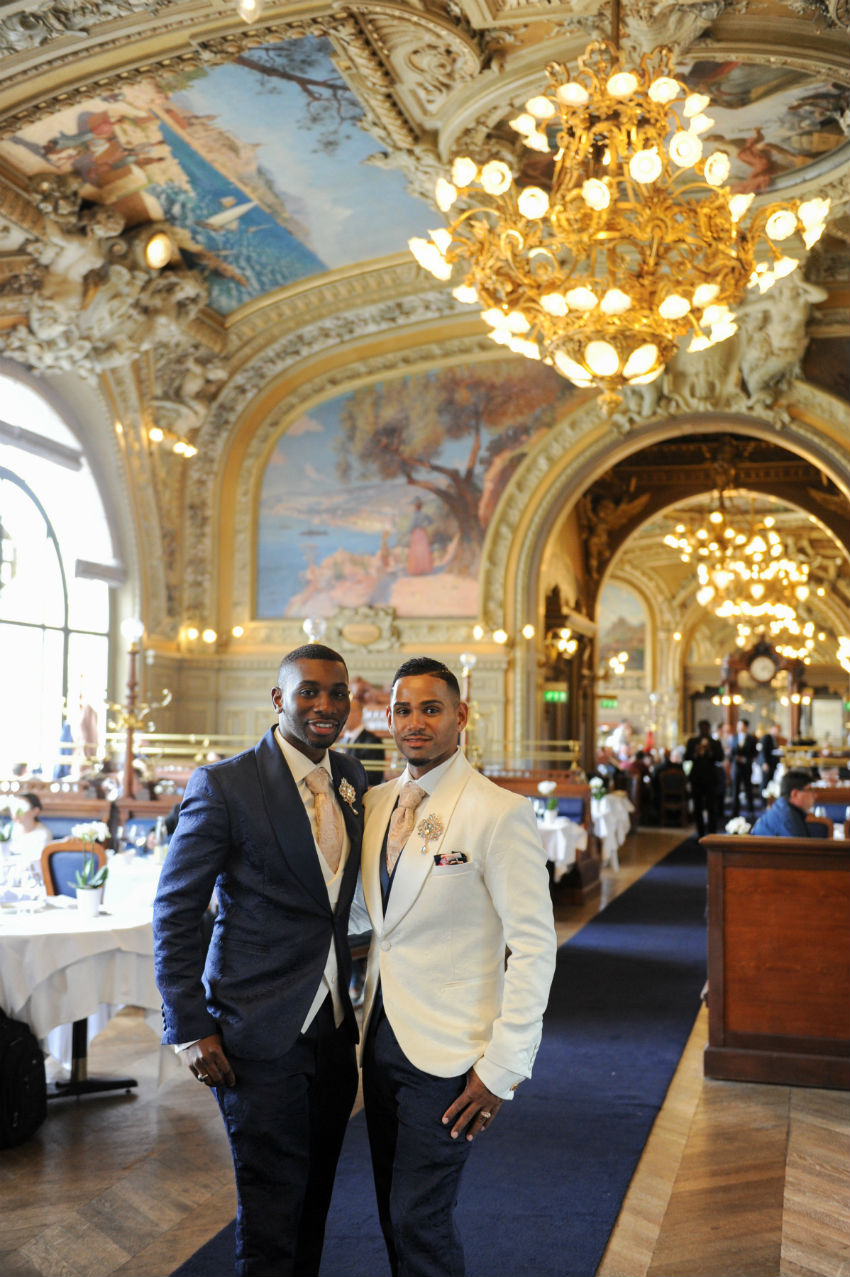 Words can't describe how much it meant to me to have my mother standing by my side. Being accepted, loved, and respected as a gay black man from your mother is a gem! I love you, mom!!! #amotherslove #pariswedding #petitpalais #motherandson #gaywedding #burrellhindswedding #loveislove #destinationwedding @theellenshow