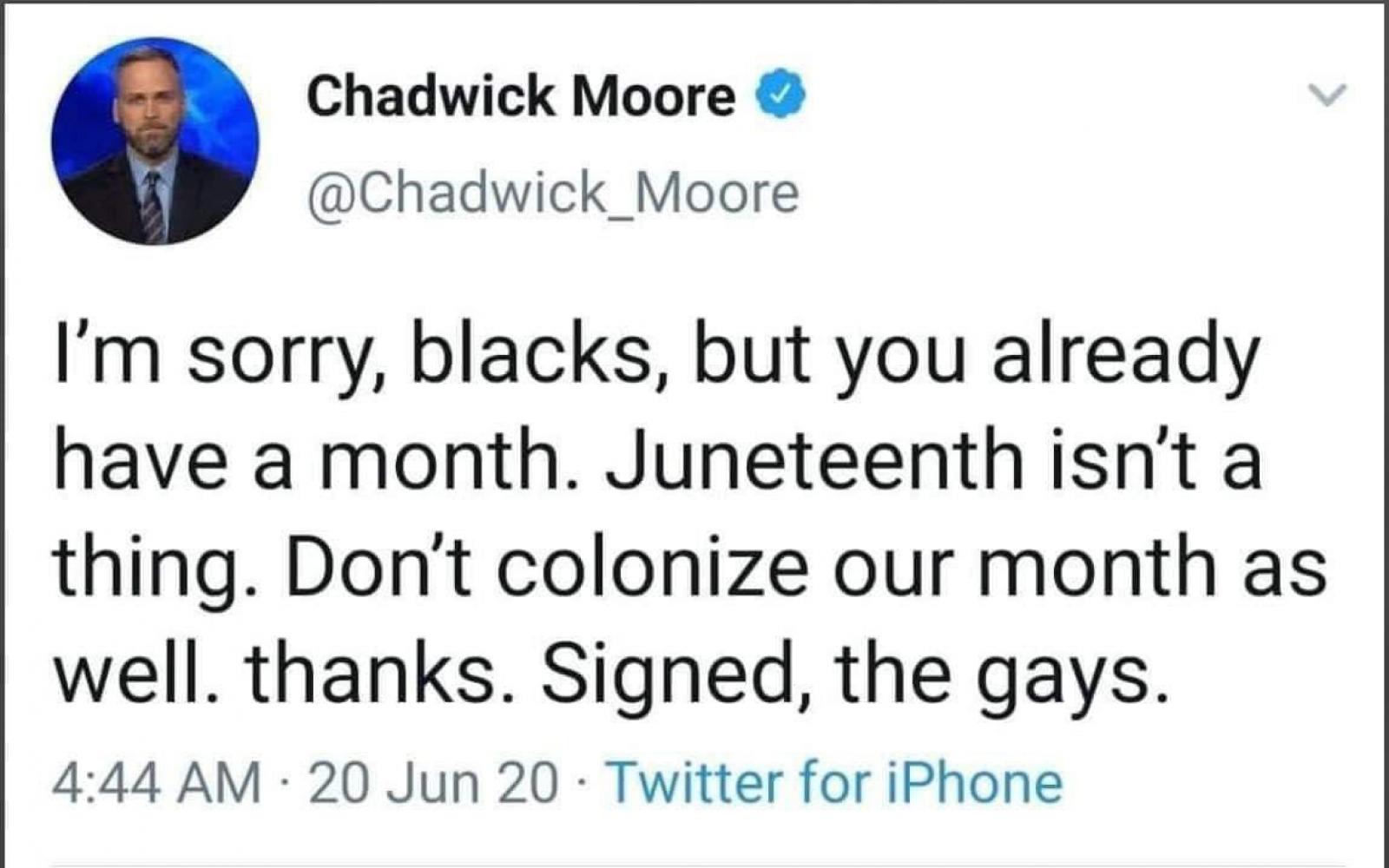 Today in "this is why I'm black first" On Saturday, “Chadwick” started trending and we were hoping the black panther hadn't said anything problematic.  He hadn't it was just another yt gay reminding us that racism exist in the LGBT community.

On Friday night, June 19, taking a dig at Juneteenth, the day that commemorates the end of slavery for African-Americans, Chadwick Moore wrote on Twitter, “I’m sorry, blacks, but you already have a month. Juneteenth isn’t a thing. Don’t colonize our month as well. thanks. Signed, the gays.”

Speaking to NPR in 2017, Moore, also a gay man, spoke about the aftermath of the profile and the “personal attacks against me, calling me a Nazi, white supremacist, completely insane and ridiculous”.

The same year, Moore wrote a personal essay in the New York Post, titled ‘I’m a gay New Yorker — and I’m coming out as a conservative’. In the piece, Moore wrote that he realized “that maybe my opinions just didn’t fit in with the liberal status quo, which seems to mean that you must absolutely hate Trump, his supporters and everything they believe. If you dare not to protest or boycott Trump, you are a traitor.”

Many gay people, however, seemed to disagree with him. Benj Pasek of the singer-songwriter duo Pasek and Paul wrote on Twitter, “I’m sorry, Chadwick, but you don’t represent us. Your bullshit isn’t a thing. Stop falling for the trap to pit oppressed communities against each other. It’s sad and pathetic. Also, black LGBTQ+ folks are the reason we even have a f****** month in the first place. Signed, the gays.”

Another Twitter user pointed out, “Firstly. Juneteenth happened 100+ years before pride. Secondly. Pride was started by whom again? Oh yes, a BLACK trans woman. So, Chadwick, I believe it's time you shut the f*** up.”

They were, of course, referring to Marsha P. Johnson, the African-American, transgender woman from New Jersey, who stood up to the police when in June 1969, the police raided a gay bar in New York called The Stonewall Inn. Following this, Johnson led a series of protests and riots demanding rights for gay people. This is what is now known as the Stonewall Riots, in whose commemoration, Pride Month is celebrated.

Moore, following the thousands of tweets criticizing him, wrote on Twitter, “This tweet seems to have touched a nerve with the left... Because they were all thinking it.”