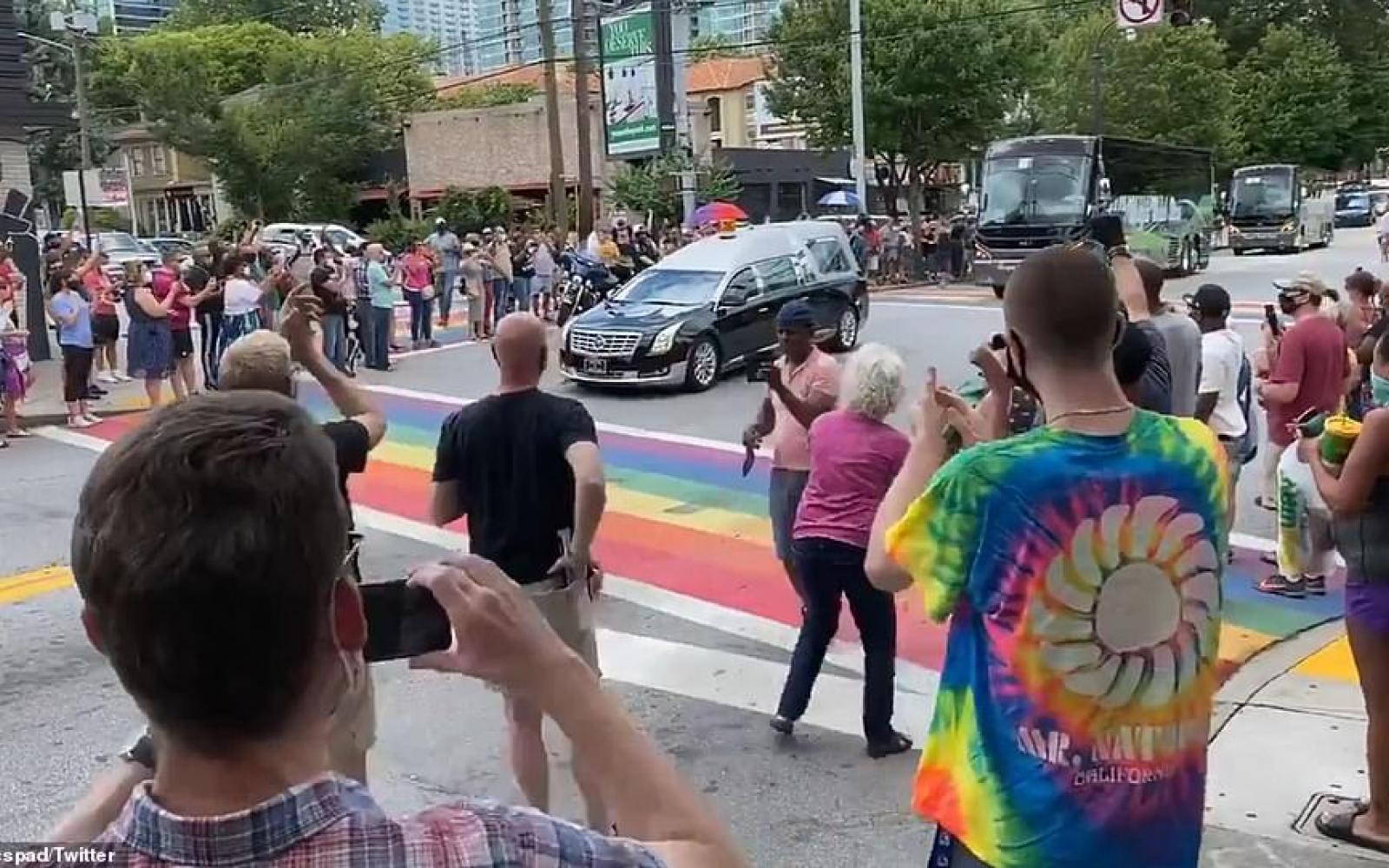 Applause and cheers rang out in Atlanta as the hearse carrying civil rights icon John Lewis paused in the center of a rainbow crosswalk in Atlanta to pay tribute to his work as an LGBTQ advocate.

The famed civil rights leader and congressman died on July 17, at the age of 80, following a battle with pancreatic cancer and returned home for the final time on Wednesday.

His casket was flown out of Washington DC, headed for Atlanta - a city he had represented as congressman for 17 consecutive terms, and more than 30 years.

The plane touched down at Dobbins Air Reserve Base in Marietta, Georgia, on Wednesday afternoon, and the coffin was taken to the state Capitol, where he will lie in repose before Thursday's funeral.

Crowds cheered and sang 'we shall overcome' as Lewis's hearse passed through Atlanta, stopping at the Rainbow Crosswalks at the intersection of 10th Street and Piedmont Avenue.

The crosswalk is a symbol of LGBTQ rights - a cause Lewis championed throughout his three decades in Congress.

Lewis's procession then continued through Atlanta to the state Capitol.

On Wednesday morning politicians gathered to see the casket off from the U.S. Capitol, where it had lain in state for two days.

A member of the honor guard who collapsed in the 96 degree heat on Monday, awaiting his casket in Washington DC, was back on duty on Wednesday and resumed his position carrying the politician's remains.

Before arriving in Atlanta, Lewis's coffin had spent two days in Washington DC.

Lewis, known as 'the conscience of Congress', traveled through the streets in a motorcade, stopping by the Lincoln Memorial and passing along Black Lives Matter Plaza, renamed in June.

His coffin was carried to the Capitol where he lay in state under the Rotunda - the first black politician to be granted the honor.

On Sunday his body was then taken, one last time, across the Edmund Pettus Bridge in Selma, Alabama - the bridge he marched across with Martin Luther King Jr in March 1965.

Ceremonies will conclude on Thursday, with a private funeral at the Ebenezer Baptist Church in Atlanta - a church with strong ties to the civil rights movement.