Lady Gaga vowed Thursday to never work with R. Kelly again and to remove a song she recorded with the singer from streaming services.

"I stand by anyone who has ever been the victim of sexual assault," Lady Gaga wrote on Twitter accompanied by a statement that followed "Surviving R. Kelly," a docuseries in which multiple women accused the R&B singer of a range of abuse including sexual misconduct.

"I stand by these women 1000%, believe them, know they are suffering and in pain, and feel strongly that their voices should be heard and taken seriously," Lady Gaga's statement said. She added that the allegations against Kelly are "absolutely horrifying and indefensible."

Referring to "Do What U Want (With My Body)," a song and video Lady Gaga, 32, recorded with Kelly in 2013, the singer said she produced the track at "a dark time in my life" after she was, herself, the victim of sexual assault.

"I think it's clear how explicitly twisted my thinking was at the time," Lady Gaga, whose real name is Stefani Joanne Angelina Germanotta, wrote.

Lady Gaga has said that she was sexually assaulted when she was 19 by a man who was 20 years older than her.

In 2015, she released a song called "Til It Happens To You" that was featured in the documentary "The Hunting Ground,” which deals with campus rape.

"I have demonstrated my stance on this issue and others many times throughout my career," Lady Gaga said in her statement Thursday. "I'm sorry, both for my poor judgment when I was young, and for not speaking out sooner. I love you."

Lady Gaga also said in the statement that she would never work with Kelly, whose real name is Robert Sylvester Kelly, again. She also said she planned to take "Do What U Want (With My Body)" off iTunes and other streaming services.

Last year, Spotify removed Kelly's music from its auto-generated playlists as part its hate content and hateful conduct policy, but the artist's songs remained on the service for streaming.

"Surviving R. Kelly," which aired last week on Lifetime, includes more than 50 interviews from women who accuse Kelly, 52, of mental, physical and sexual abuse, as well as interviews with associates and relatives of the singer.

In the wake of the "Surviving R. Kelly" docuseries, a Chicago-area prosecutor on Tuesday asked that anyone who is alleging abuse by the singer contact her office to investigate their claims. She said that families of two alleged victims have already come forward.

Kelly has repeatedly denied all the allegations against him, including engaging in sexual misconduct. He was charged with child pornography in 2002 after a tape appeared to show him having sex with, and urinating on, an underage girl. He was acquitted in 2008.

Last year, Kelly released a 19-minute song called "I Admit," in which he sings "I admit I have made some mistakes/And I have some imperfect ways."

But he also defended himself, adding he's "not convicted, not arrested, dragged my name in the dirt/All this work to be successful, when you abandon me 'cause of what you heard."

Man who claims his adult daughter is held against her will by R. Kelly alleges he was threatened
An attorney for Kelly in Chicago, Steven Greenberg, told NBC News Wednesday that neither he nor Kelly have watched the docuseries.

"Over a decade ago, he was found innocent of any wrongdoing," Greenberg said. "For people to now accuse him of things, they’re just haters trying to ruin his career. 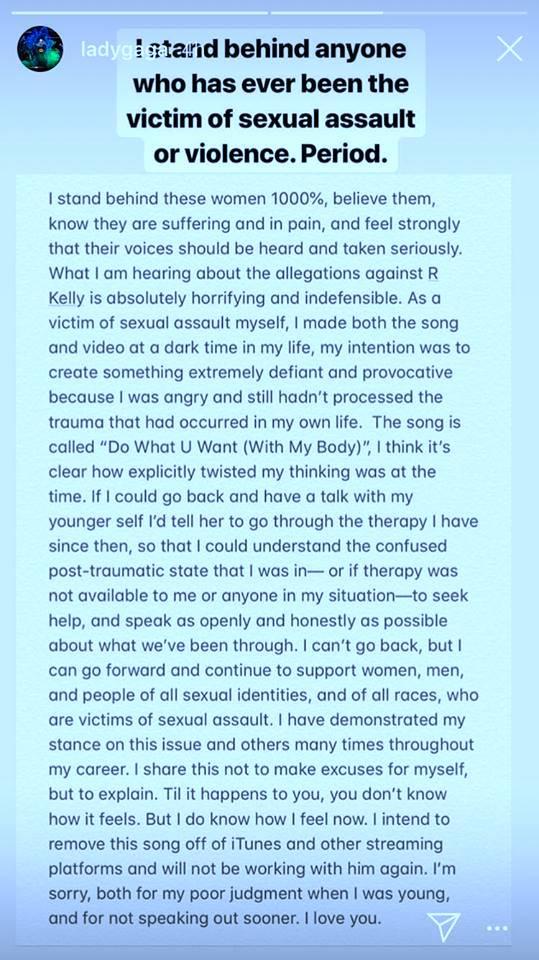