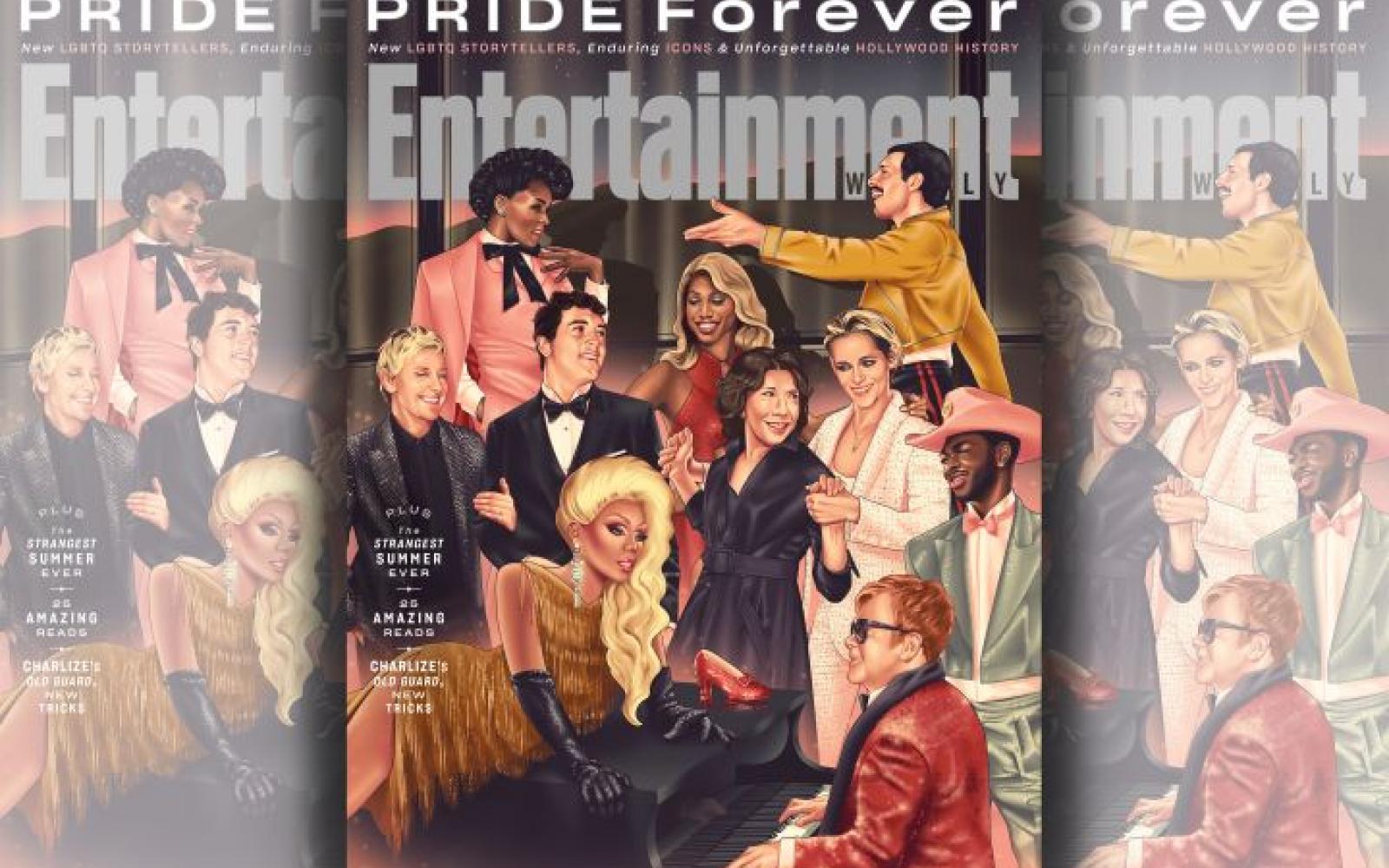 Every year EW goes all out for their Pride issue and this year is no different.  Because of coronavirus they are unable to shoot the cover so they did the next best thing.   They went animated.

How do you gin up a celebration in the midst of a global pandemic? For our annual Pride issue, EW editors turned to the power of art.

Our June cover is always a salute to LGBTQ entertainers. But this year we were faced with some pretty daunting hurdles.

We had big dreams: To bring Pride festivities home to an audience an unable to participate in big parades and parties, and to pay homage to Hollywood’s LGBTQ storytellers — past, present, and future.

But marking the month with some big, elaborate, social distance shattering photo shoot was definitely out.

So, we teamed with London-based illustrator Jack Hughes to create a totally different kind of EW cover — one that pays tribute to the central role LGBTQ artists have had in Hollywood from its very beginnings.

Our inspiration came from the great murals and magazine covers of the 1920s and 1930s. And sort of like a mini-WPA, which employed artists across the country during that time period, we wanted to put the spotlight on talented artists at a time of great economic hardship.

The cover — and indeed our entire Pride cover package —was created in collaboration with LGBTQ illustrators in an effort to make the Pride experience richer for folks stuck in their homes (even the portrait for my editor’s letter is a work of art — by the great Michael Hoeweler).

For our cover illustration and the opening spread of our Pride package, Hughes worked closely with EW deputy design director Chuck Kerr to place 18 iconic LGBTQ stars in an imaginary party in the Hollywood Hills.

“As an LGBTQ+ artist, I know how important representation in the media is,” says Hughes. With painstaking attention to detail, he juxtaposed legends of the past with stars of today and a rising new generation of talent.

And because EW loves an Easter egg, Hughes hid a few throughout our tableau — I won’t spoil your fun by calling them all out, but my favorite is a copy of EW’s very first issue, which came out in 1990, featuring groundbreaking singer k.d. lang on the cover.

It’s all part of an expansive celebration of Pride that includes interviews with Greg Berlanti, Hannah Gadsby, and rising star Hayley Kiyoko, among others. There’s also a roundtable with the hottest LGBTQ authors and deep dive into the complex life and legacy of a Hollywood original: Paul Lynde.

But that’s only the beginning. Throughout the month of June, we’ll be bringing Pride home to you in all kinds of fun ways — with more stories, celebrations, and an exciting new audio series, Untold Stories: Pride Edition (launching June 8), which will look at the lives, loves, and struggles of Hollywood’s LGBTQ pioneers.

It all started with desire to give you something special — one of the few illustrated covers we’ve done in our 30-year history. We hope it lifts your spirits in trying times. And as Hughes says, we hope it inspires the storytellers of the future. “The fight isn’t over,” says the artist. “We must carry on the work of those before us.”