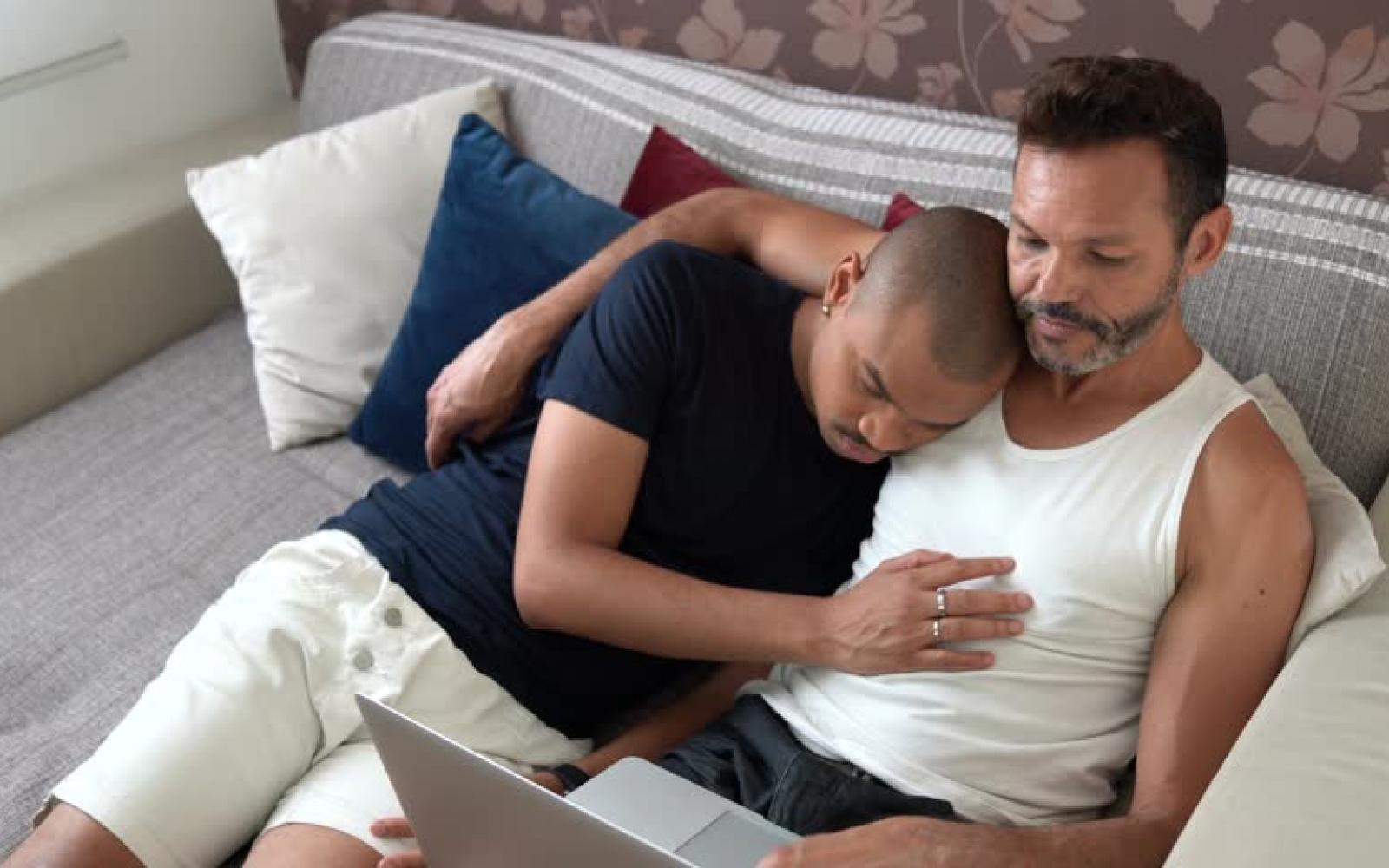 A man discovered that his boyfriend of two years had been lying to him about being out of the closet.

The BF's parents had no clue about their son being gay, and they were about to spend their first night staying at the couple's apartment.
Redditor "HumbleInstruction4" asked AITA (Am I the A**hole) for refusing to pretend he was just a roommate to perpetuate a lie about the boyfriend's sexual identity.

"My boyfriend and I have lived together for a year now, we are both men in our twenties."

"Our flat has two bedrooms - we use one and the other is a spare for quests and also an office. I was under the impression that my boyfriend is out, however I haven't met his family yet (we are in California, his family is in Florida)."

"He assured me that he is out of the closet."

"He told me his parents are coming to visit us. Cool. No problem with me - my own parents have spent the night at our flat in the past."

"When I came back home from work, my boyfriend was tidying up the spare bedroom/office. Or so I thought."

"When I peeked in I noticed he moved some of my personal stuff that I keep in our bedroom to the spare bedroom. My entire nightstand for example, with my chargers and books."\

"I asked him what's up with that, do his parents need my chargers or something? He looked embarrassed and told me that I 'have to' sleep in this bedroom."

Remember that part about the boyfriend being out of the closet?

Well, the boyfriend forgot to mention one major detail.

"Turns out his parents have no idea he is gay."

"They know about me but they think we are roommates. He wants me to play along and pretend that I live in the spare bedroom. His parents will sleep in our bed while he will take the couch."

"I said no freaking way and he got mad, saying that I have no right to force him to come out. Well god d*mn I though he has been out for ages!"

"Now after a year of living together he springs on me that his parents think he is straight. I don't even know if they know that I, the supposed roommate, am gay. Is he gonna ask some female friend to act as his beard too?"

"We fought about this, I won't budge. I moved in with him thinking he's an openly gay man, I simply will not play this game."

The OP gave his boyfriend of over two years an ultimatum.

"His parents are coming over tomorrow and I told him that either he tells them the truth and I stay in the flat as his partner of 2+ years, or he can greet them as a single 'straight' dude with no roommates because I'm packing my sh*t and going to crash at a friend's place."

"He tells me that I can't understand since I come from a 'cool hippie San Francisco family' and his folks are 'southern religious hicks' and being gay is not cool with them."

"Fair enough but he told me repeatedly in the past that he is out! I've been lied to."

Most Redditors sided with the OP as NTA (not the a**hole); however, a handful responded with YTA (you're the a**hole) and ESH (everyone sucked here) comments.

"YTA if you out him. Don't give him an ultimatum, just leave."

"He should have been honest about all of this with you before, and his reluctance makes him the a**hole."

"However we don't know his experience. We don't know why he didn't come out to them and that might become clear when you meet them."

"Some parents are so bigoted, it forces their kids to compartmentalize their relationships, and though it might seem like a big thing to you, maybe his parents aren't as important to his life." – fantasticox

"I was thinking it would probably be ESH, maybe that OP was the a**hole for outing someone against their will."

"But for real? The boyfriend claimed to be out until the day of and then 'surprise, actually I'm not?' Like that's one of the first things most gay couples talk about, is whether either of them are still closeted, because it affects the partner."

"This is the kind of thing that needs to be discussed beforehand, and that makes the boyfriend 100% a**hole for actively preventing the discussion from taking place.This isn't something you lie about. Lies are bad in general but this one is HUGE." – Karaethon22

Though some empathized with the BF's relationship to his parents, he was called out as YTA (you're the a**hole).

"Yes, maybe his family isn't the most tolerant. I feel for him there, if that's the case."

"However, he started and continued a serious relationship with you based on a big lie, one that he only confessed to when he was caught."

"He then immediately began to act like you're the problem, when he's the one who has been lying to everyone. Your conditions are more than reasonable, and the posts suggesting you play along for just a day...it's NOT just a day."

"They're staying at least for a night, and even if they leave the next morning, presumably they will visit again. When does it stop?"

"He can continue to lie to them if he wants, but you in no way have to be a party to it." – hannahsflora

"Pack up. He's already made the decision for you, and was hoping to blindside you into shock-acceptance."

"Not just acceptance by 'So we had a convo about what's going on.' THAT would have been so much better. But no, he decided to spring this on you at the exact last minute, and hope you accept whatever comes of it."

"Has he done anything even remotely like this before? Presented unacceptable situations where there's no wiggle room to get out of them, where you have to accept the outcome?"

"Tbth, I was ready to call you an arse based on the title, thinking that y'all had a convo about it and you were kinda a tad salty, but his behavior with blindsiding you with this info makes him 100% the red-flag wielding a**." – Not-Mom15

"NTA, the bf has made plenty of mistakes here. While I'm not gay, and so maybe this is me speaking on something I have no knowledge of...I could totally understand not wanting to come out to your parents in the spur of the moment on a weekend visit (when you had no prior intention of doing so) while also in the midst of an argument/dealbreaker with your partner."

"I think OP is making the right move. Remove yourself from the situation, let the bf have his cover-up weekend with the rents, and then reconvene after and discuss the potential 'coming out' as a way to save the relationship with a clear head and time to plan since it sounds like this is going to be a pretty big deal to the rents, for right or wrong." – TheWinteredWolf

"You need to take a step back and re-evaluate your relationship here. It looks like your boyfriend doesn't value you as a partner if he feels it's OK to lie to you for so long. Definitely NTA." – The-Shaffy

"And at the very least, he's more concerned about coddling his parents' bigoted views than respecting his partner's feelings. Your chosen family > your biological family." – MedusaExceptWithCats

One Redditor called this an example of gaslighting.

While many agreed the OP was NTA, others disagreed about it being a gaslighting situation.

"NTA. This is a steaming pile of gaslighting. He lied to you, OP, plain and simple."

"The he tried to turn it on you and act like you are somehow the problem for wanting to be treated with respect and humanity in your own home. I'm so sorry you're suddenly realizing this about a partner that you've spent over 2 years on."

"Unrelated, but his parents are going to sleep in your bed? That's weird af." – IAmAllOfTheSith

"i agree with what you're saying but this isn't gaslighting. BF just regular lied and is an a**hole by making OP feel guilty. Gaslighting is when you lied to someone in direct conflict with the obvious reality. If Bf was saying that he never lied and never told OP he was out, THAT would be gaslighting."

"Gaslighting is far more of an extreme thing than most of us will ever experience, thankfully."

"Gaslighting is the extreme instance where the victimizer needs to be right in order to preserve their sense of self. In this case the victimizer is just trying to convince OP that he was justified in his actions."

"Which is wrong sure, but doesn't even approach the threshold for gaslighting. When someone gaslights someone they make the other person question their own sanity, not just whether they were right or wrong."

"They try to convince the other person that events never happened, that they remembered something incorrectly, and that they are LITERALLY insane for thinking or feeling the way they do." – ImpairedHarvey

People were perplexed over the proposed sleeping arrangements.

"The thing that baffles ME about BF's thinking is the sleeping arrangements. OP and BF have a bedroom."

"They also have a GUEST ROOM. BF was moving OP into the guest room to pose it as his room, leaving their actual bedroom as his own, where parents will sleep while BF is on the couch."

"Why the hell wouldn't he just pose the guest room as HIS room, and leave OP in his own bed?"

"Like, they ALREADY HAVE a guest room. Why wouldn't he put his guests in the guest room, even if they don't know that's what it is? Why put them on OP's bed? (I feel weird about the thought of anyone ever being in my bed. It creeps me out.)" – vonsnootingham

"This is a really good point that didn't jump out to me. Boyfriend is already expecting OP to be cool with being lied to, be complicit in the lie, but BF also chose to uproot OP's sleeping arrangements instead of his own?"

There is a reason why LGBTQ people date others who are mutually out to their families.

"It's also a pretty big freakin deal in the LGBT dating community to lie about not being out."

"Like, it's a dealbreaker for some people. Dating someone in the closet is basically going back in the closet yourself in a lot of ways, and many people don't want the stress of hiding their relationship, so they only date people who are out."

"This is not an uncommon disagreement in LGBT relationships and there's no way OP's boyfriend didn't know this could cause problems." – sleepybitchdisorder

"All future plans would be on hold until he comes out of the closet. If he ever comes out."

"No chance of getting married, no holidays together, no way of showing up if either of them is sick.... That's a very reasonable dealbreaker." – Irishkickoff

Here's a message for the BF:

"OR not even having a heart to heart about it before just deciding to move all his sh*t out of his own room." – nbuellez

"For now I'm staying with a friend, I won't go home until his parents are gone."

"Being closeted is a dealbreaker for me and he knows it, he has known it since the beginning - I would never out him to his family though."

"We are going to talk once his parents are gone. I love him and want to keep the relationship going, but that can't happen until this whole thing is resolved."