Marvel Comics, the home to such blockbuster heroes as Black Panther, Spider-Man, Captain America and Iron Man (to name but a few), has just unveiled its first ever mutant X-Men drag queen superhero — Shade.

Created by out Iceman writer Sina Grace and artist Nathan Stockman, Shade sashayed into comic book history in last month’s Iceman number four (on stands now). Despite Shade having an all-too-brief one panel appearance in the comic, the X-Men fandom has already excitedly embraced the character. Fan art celebrating the debut of Shade has been pouring in via Grace’s twitter.

It’s only fitting for Shade to make her first dragtastic appearance in the pages of Iceman as the comic book is currently Marvel’s only monthly series featuring a queer lead character. Grace has joyfully charted the all new, all different and all gay adventures of Iceman since the book debuted in 2017, after coming out as queer in 2015.

“I really wanted this series to push readers to new and better stories about the whole queer experience and how it applies to being both a mutant and a superhero,” Grace recently told The Advocate regarding his work on the Iceman series. “There’s a million different queer perspectives and we’re only scratching the surface.”

In fact, it’s this very same audience’s overwhelming desire for queer superhero perspectives that brought Iceman back from death. While the 2017 solo series earned a GLAAD Media Award nomination and was rapidly supported by throngs of LGBTQ readers, Iceman was cancelled after just 11 issues. Sadly the popularity of the Iceman monthly comic didn’t quite equal up to the sales of the rest of Marvel’s heroic line of books.

Then something nearly unheard of in modern comic publishing happened; brisk sales of the two Iceman trade paperbacks (trade paperbacks are the collected single monthly issues printed in a graphic novel format) inspired Marvel to give Iceman a second life in 2018. With Grace back again at the writer’s helm, Iceman was renewed for a new volume of stories, which included five more monthly issues plus a special extra length annual entitled X-Men: Winter’s End. 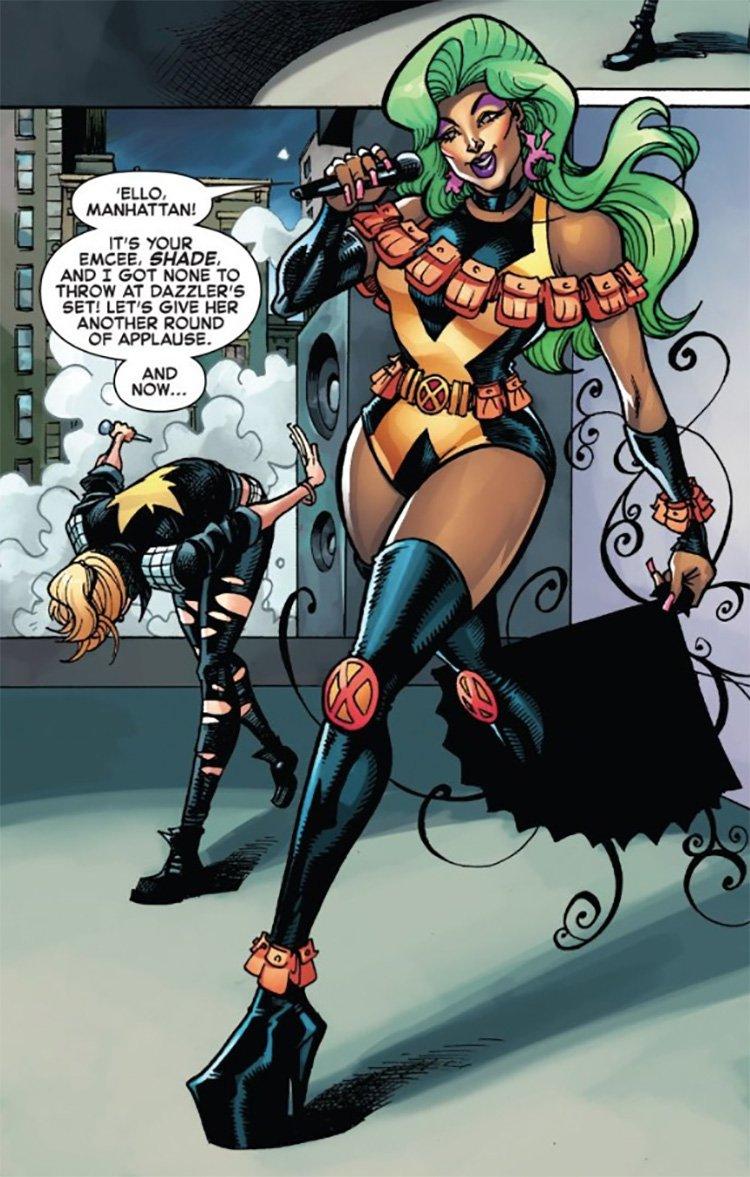 “My goal with this new Iceman series is for for everyone, myself, the readers, the characters involved in the comic book, to have fun,” declares Grace. One may say adding a fierce and fabulous drag queen mutant X-character who steps out of a handheld folding fan to emcee a Mutant Pride event is a direct manifestation of this very goal.

Take a casual look at Shade’s character design and it’s clear she is meant to embody fun. She is living the full X-Men fantasy while serving an over-the-top drag aesthetic. Shade brings mutant kween realness with her snatched bright queen wig, skyhigh boots with uber pointy heel, a comical row of countless pouches on pouches on pouches on pouches across her chest (which is a campy wink to the oft-ridiculed '90s comic book era where tiny, needless pouches were a fashion must), a one piece bodysuit festooned with an X, and a pair of earrings devoted to some deep cut X-Men references: Lockheed, and the other with the word 'Bamf.'

Writer Grace confirms Shade’s mutant power is to teleport. She can open pocket voids that allows her step into and out of her handheld folding fan. A power will no doubt to come in handy as readers will be thrilled to find out that Shade pops up again throughout this month’s Iceman issue five (hitting newsstands today) and again in the special X-Men’s: Winter’s End extra length annual issue (out in February).

So, could a Shade solo series be far behind? Followed by a Netflix series or big budget flick? With drag gone mainstream, anything is possible. Never doubt the power of a true queen’s ability to make her dreams come true. Afterall, to (kinda) paraphrase Mama Ru: “We’re all born mutant and the rest is drag.”