My Parents Don't Care That I'm Gay Anymore, They Just Want Some Grandkids 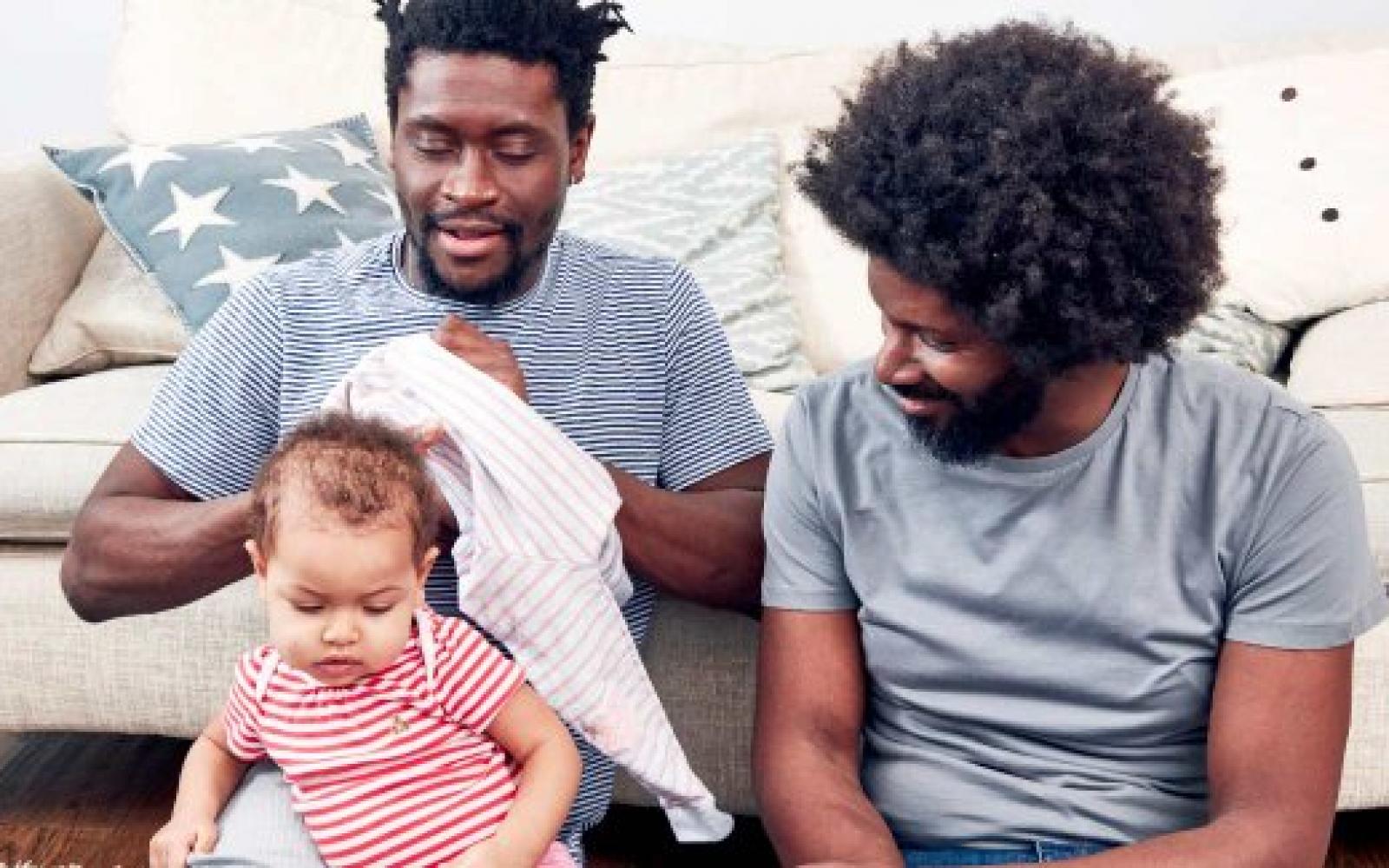 Just when I was getting used to enjoying this disposable income.  If you had told me when I first came out to my parents that we'd one day be having a conversation about when I was gonna bring some grandbabies around for them to spoil I would have said "I don't think I'll have that to worry about".  But here we are 10 years later and my mom is asking and we're looking at each other like:

I can't tell you when it happened exactly, but at some point my parents started caring less and less that I wasn't straight and more that I was happy.  Of course what I consider happy and what they consider happy aren't always the same.  They see that my partner and I have been together for some time now and they've started asking questions about marriage and kids.

When I first came out, one of the first things my parents were concerned about is that they wouldn't get any grandkids out of the deal.  Now they are sending me text messages and hints saying things like "you know they have ways you can have kids now" or "you could even adopt a child"

I guess I should be happy (I am lowkey pleased) but still.  Kids?  I don't know ya'll.

I do know that the only thing parents love more than their kids are their grandkids.

As gay parents and their children are becoming more visible in the neighborhood, at the P.T.A. on TV shows and Superbowl commercials,'' some gays and lesbians say they are starting to feel a new element in the family weather: The PUSH. Parents who once resigned themselves, however painfully, to what they assumed would be a life without grandchildren are now starting to do something about it.

And for some, soon is not soon enough. ''My mother keeps telling me, 'Come on, where's the grandchild?' '' said Cyndi Harrison, a nurse practitioner who lives with her partner in Los Angeles, in an interview with the New York Times. Ms. Harrison, who is undergoing artificial insemination, says she is overwhelmed by the support she has received from family and friends, both gay and straight. ''I used to hear gay people say things like, 'I'm gay because I don't want to have kids,' '' Ms. Harrison said. ''I don't hear that anymore.'' Her mother and sister-in-law have gone so far as to suggest an old family friend as the sperm donor.

Ms. Harrison added, ''Even my stepmother says, 'You guys would make such good parents, you have good careers. What's taking you? It would make your father so happy.' '' Ms. Harrison's mother, Frances Giordano, denies putting on the squeeze. ''No, not me,'' she said. ''My daughter-in-law does that.''

In recent years, gays and lesbians asserting their parental rights have been able to cite a 1995 report from the American Psychological Association, which concluded, ''Not a single study has found children of gay and lesbian parents to be disadvantaged in any significant respect relative to children of heterosexual parents.''

At the same time, adoption agencies, sperm banks and organizations that work with surrogate mothers have become more sensitive to gays and lesbians, said Rebecca Isaacs, director of policy and public affairs at the Los Angeles Gay & Lesbian Center. These developments have not escaped would-be grandparents.

Ms. Isaacs, whose daughter is 5, said her parents never gave her the elbow about having children. ''They try hard not to be noodges,'' she said. ''But they're thrilled.''

Such robust enthusiasm, not to say pressure, is still the exception, said Ann McHugh, who leads a support group called Lesbians Considering Motherhood in Manhattan. More commonly, Ms. McHugh said, the women in her group say their desire for children creates a second round of tension with their parents, and sometimes a second wave of rejection. Even in supportive families, she said, gays and lesbians often question how the extended family and community will treat their children. ''Unlike straight people, it's never something we can do without having to think about the consequences,'' she said.

After the immediate worries about AIDS, the grandchild question can be the biggest hurdle for parents of gays and lesbians. ''That was the first thing that entered my mind,'' said Joyce Trebich, who works with her husband, a real estate appraiser, in Smithtown, Long Island. Ms. Trebich said she and her daughter, who is a lesbian, often discuss the possibility of children. Ms. Trebich is ready, she said; her daughter, Alison, is not. ''Maybe someday they will,'' Ms. Trebich said. ''I say, 'If you do, I would like you to do it' '' -- meaning that Alison should be the biological mother -- ''so I'm the grandmother.''

David Patton, who is opening a restaurant in Atlanta, said his parents were way ahead of him in picturing him as a father. When he told his mother seven years ago that he was gay, he said, ''she told me, 'That shouldn't be an excuse for you not to have children.' I'm so proud of her for that.'' Mr. Patton has for now delayed his plans for children -- his partner, a doctor, lives in Finland -- but he said that he and other gay male friends are not above collecting string. ''Whenever a woman says, 'I don't want to have any kids, but I think I might enjoy the feeling of being pregnant,' we say, 'I'm going to put you on our short list.' ''

Some aspiring grandparents like to twist arms; others try more subtle means of persuasion. Ellen Schwartz, a real estate agent in Teaneck, N.J., said her daughter has had a partner for 10 years -- ''and no grandchildren yet.'' Though she would love a grandchild, Ms. Schwartz said she was not the type to press the issue, at least not directly. ''I asked my daughter: 'What should I do with your old baby cello? I was holding it in case you decide to have children.' That might have been a backdoor approach.''

When gay people do have children, it can set off a wave of parental nudging in their immediate circle. Lane Janger, a New York filmmaker and actor, always wanted children, so he and his partner went to Growing Generations, an agency in Beverly Hills, Calif., that specializes in connecting gay men with surrogate mothers. As he spoke, his twin daughter and son, Flynn and Javin, born Oct. 19, made loud mischief in the background.

Since the twins arrived, Mr. Janger said, ''One of my best friends' parents came by, and now they're pressing him to have kids.'' The parents of Mr. Janger's partner have also been profoundly affected, he said, and for the better. In the past, ''they definitely thought gay people shouldn't have kids,'' Mr. Janger said, adding: ''Now his mother goes through pictures every day. She wants to know what they're wearing, what they're eating, what their poops look like.''

Mr. DeFilippis, 33, does not yet have children, but not for lack of desire or effort. He and his partner, David Koteles, first discussed adoption, an option that caused his mother a pang of remorse. She had learned how to be a mother by raising Joseph, and cherished the prospect of dandling a grandchild with his baby features. More recently, the men entered into an arrangement to conceive a child with a lesbian couple, and to raise him or her jointly. Joseph will be the biological father, a prospect that delights his mother.

The arrangement could lead to a tangle of legal questions should the foursome pull in different directions. ''All my friends asked a lot of questions: Who's going to raise the child? What if things don't work out?'' Mr. DeFilippis said. ''My parents, who can turn what olive oil we use into a big argument, were like, 'Get pregnant now, work it out later.' And they are not like this in any other arena. They were like, 'Give us the baby.' '' His father, Nunzio DeFilippis, also brought to bear some practical considerations. The house in Flushing, he said, ''is too big for just us.''

His son laughed heartily at his predicament -- the potential for complication, the pushy parents -- but also recognized his good luck. A decade ago, a gay couple could not have expected such support from family and others. Joseph DeFilippis works with elderly gays and lesbians, many of whom internalized the ugly myth that gay men are likely to be pedophiles. While his parents are gung-ho, some of the older gays question his decision to have children.

''Sometimes it feels like I'm in a gay version of a family sitcom,'' Mr. DeFilippis said, ''but I also feel incredibly fortunate.'' He'll get the results of the next insemination attempt in the middle of next month. His mother can't wait.