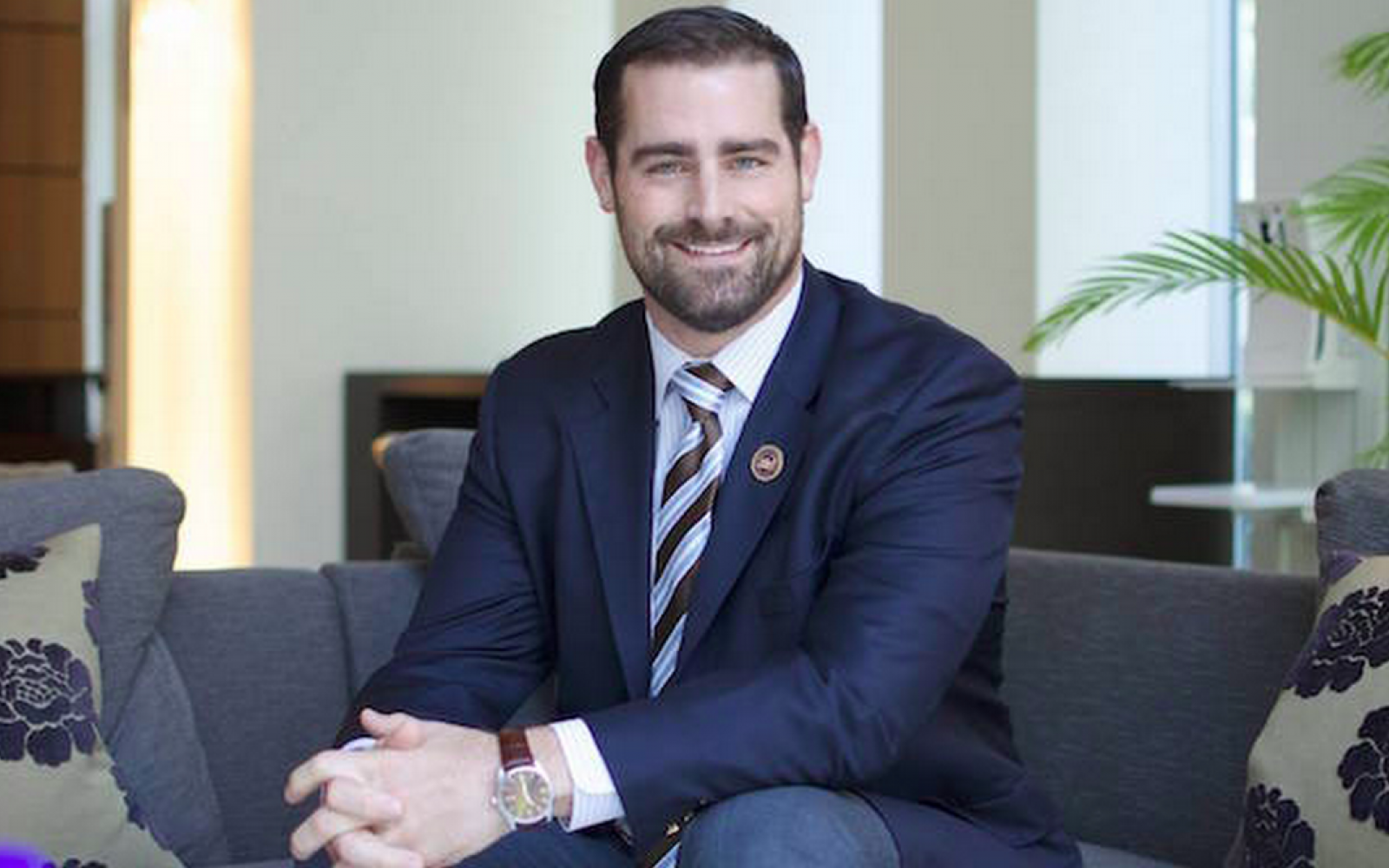 Gay Pennsylvania State Rep. Brian Sims (D-Philadelphia) is under investigation by local police for making “veiled and direct threats” against a Republican lawmaker during a heated phone conversation on Monday night, Aug. 3, according to the alleged target of the threats.

Republican state Rep. Thomas Murt, who represents a district along the border of Philadelphia and a suburban county, told the Washington Blade that Sims appears to have become irate when he learned that Murt sent a memo that same day to fellow lawmakers asking them to co-sponsor an “LGBTQ+ Bill of Rights.” Murt said he and three fellow lawmakers plan to co-introduce the bill in the Pennsylvania House of Representatives after making a few last-minute “tweaks” to the legislation.

“He made veiled and direct threats to me, to my staff, to my constituents,” Murt told the Blade in an interview. “You know what he did is possible criminal behavior. And it’s being investigated now by law enforcement,” Murt said.

Neither Sims nor a spokesperson from his legislative office in the state capital in Harrisburg responded to a call from the Blade seeking to obtain Sims’ version of the alleged threats that Murt says he made. Sims is one of the state’s first openly gay elected officials.

The Blade contacted the police department at Upper Moreland Township, which Murt said he contacted shortly after Sims allegedly threatened him to report the incident. An operator answering the phone referred the Blade to the direct number of the department’s Chief of Police, Andrew Block. Block didn’t immediately return the call.

In a statement released by his office on Aug. 4 Murt said that in the recent past, he and Sims have been “gracious colleagues and friends.” According to Murt, on Aug. 3 Sims sent him a text message that was “angry, enraged and wrathful, accusing me of treating LGBTQ+ rights as a ‘joke or a football.’”
Murt said in the statement that he immediately called Sims to find out what he was upset about.

“He answered my call and he directly launched a verbal, hostile and threatening attack on me personally, using foul language, screaming at me, and stating that [in this order]: ‘I will ruin you.’ ‘You are finished.’ ‘I will get you for this.’ ‘I’m not done with you.’”

After ending the call Murt said he called the Upper Moreland Township Police Department and an officer later visited his home. “I spoke to an officer about what happened. I expressed to the officer that based on the actions and threats made by Rep. Sims, I was very concerned for the safety of me, my family and my staff,” he said.

Sims did not directly say why he was angry, Murt says in his Aug. 4 statement. “I could only suspect that it might be about a co-sponsor memo I circulated earlier that day” seeking co-sponsors for his planned LGBT rights bill, Murt notes in his statement. “In the past, Rep. Sims and I have worked together on LGBTQ+ issues, so I was not sure why he would have been so enraged about this particular bill.”

The Capital Star, the daily newspaper in Harrisburg, and the Philadelphia Gay News, which reports on LGBT news in Pennsylvania, each published a story about what they described as Sims’ “belligerent” phone conversation with Murt. The two papers said Sims did not respond to their requests for comment.

But the papers quoted from a Twitter message they reported that Sims posted before he deleted the post a short time later.

“Lol in my entire life I’ve never said these things to Tom or anyone else,” the two papers quoted the post as saying. “I did make it abundantly clear to him that killing the effort to advance LGBTQ legislation in Pennsylvania with his weird campaign effort is something that I’d make sure advocates knew about. And they do.”

Sims alluded to his apparent opposition to Murt’s plan to introduce an LGBT rights bill in an Aug. 6 op-ed commentary he wrote for the LGBT news magazine The Advocate. Entitled the “Dangers of Performative Allyship,” the op-ed warns that Republican members of the Pennsylvania General Assembly “have often attempted during election years to portray themselves as moderates rather than the conservative, anti-civil rights advocates they truly are.”

Sims argues in his op-ed that Republicans have retained control of both houses of the state’s General Assembly due to a “gerrymandered” electoral system in Pennsylvania in which there are nearly a million more registered Democrats in the state than Republicans. He said Republicans manage to retain control of the legislature by tricking voters into thinking they are far more “moderate” than they are by, among other things, introducing progressive legislation at the end of the legislative session during election years, knowing the legislation doesn’t have a chance to pass.

Sims makes no direct mention in his op-ed of GOP representative Murt and Murt’s plan to introduce an LGBT rights bill. But the op-ed implies that Murt’s effort is an insincere ploy to dupe voters, including LGBT voters, into thinking Republicans are supportive of LGBT equality.

“So, I ask everyone who believes in equality, to keep a close eye on the false efforts, and the false support, we’re going to see these next few months,” Sims wrote in his op-ed. “…[T]hey are not an ally, they are an opportunist.”

Longtime LGBTQ rights advocate Mark Segal, the editor and publisher of the Philadelphia Gay News, wrote his own commentary about the Sims development in an Aug. 6 op-ed that disputes Sims’ suggestion that Murt is not a true LGBTQ rights supporter.

“State Rep. Brian Sims, to put it politely, lost his temper with State Rep. Tom Murt this week,” Segal wrote. “Murt has been a strong LGBT ally for years, not just in election years,” Segal states. “This is not the first such outburst from Sims, but while he might claim that other outbursts were directed at those who do not support our rights, this time it was aimed at an ally, someone who has consistently been in our corner.”

Segal goes on to dispute what he says is Sims’ claim that Murt’s motive for introducing the LGBT rights legislation was to advance the cause of fellow Republicans and himself and that the effort would ultimately hurt efforts to pass LGBT rights legislation. Segal notes that Murt is not running for re-election this year, so introducing an LGBT bill couldn’t be aimed at advancing his own re-election.

“How does a pro-LGBTQ bill kill the effort to advance LGBTQ legislation?” Segal asks in his op-ed.

“With Sims’ failure to deliver LGBTQ non-discrimination legislation in his eight years in office, you’d think he’d support any positive LGBTQ movement in Harrisburg,” Segal wrote. “Or is it because his name was not front and center this time?”

Another possible reason for Sims’ opposition to the LGBTQ rights bill Murt plans to introduce, Segal says in his op-ed, is that Sims is supporting the Democratic candidate running against one of the Republican co-sponsors of Murt’s bill in the upcoming election.

“That indeed would be playing political football with our rights,” Segal wrote. “And the one doing it is Sims. He is putting politics before LGBTQ legislation”

Segal adds in his op-ed that Sims goes one step further by calling on fellow Democrats not to sign on as co-sponsors of the LGBT rights bill that Murt will be introducing, an action, Segal wrote, that could hurt efforts to build bipartisan allies to support LGBTQ rights legislation.

“This is an opportunity for Republicans and Democrats to work together on these issues,” Murt said. “And I’m sorry that he’s attempting to make a political donnybrook out of it because these are people of good will on both sides of the aisle that care about these issues.”