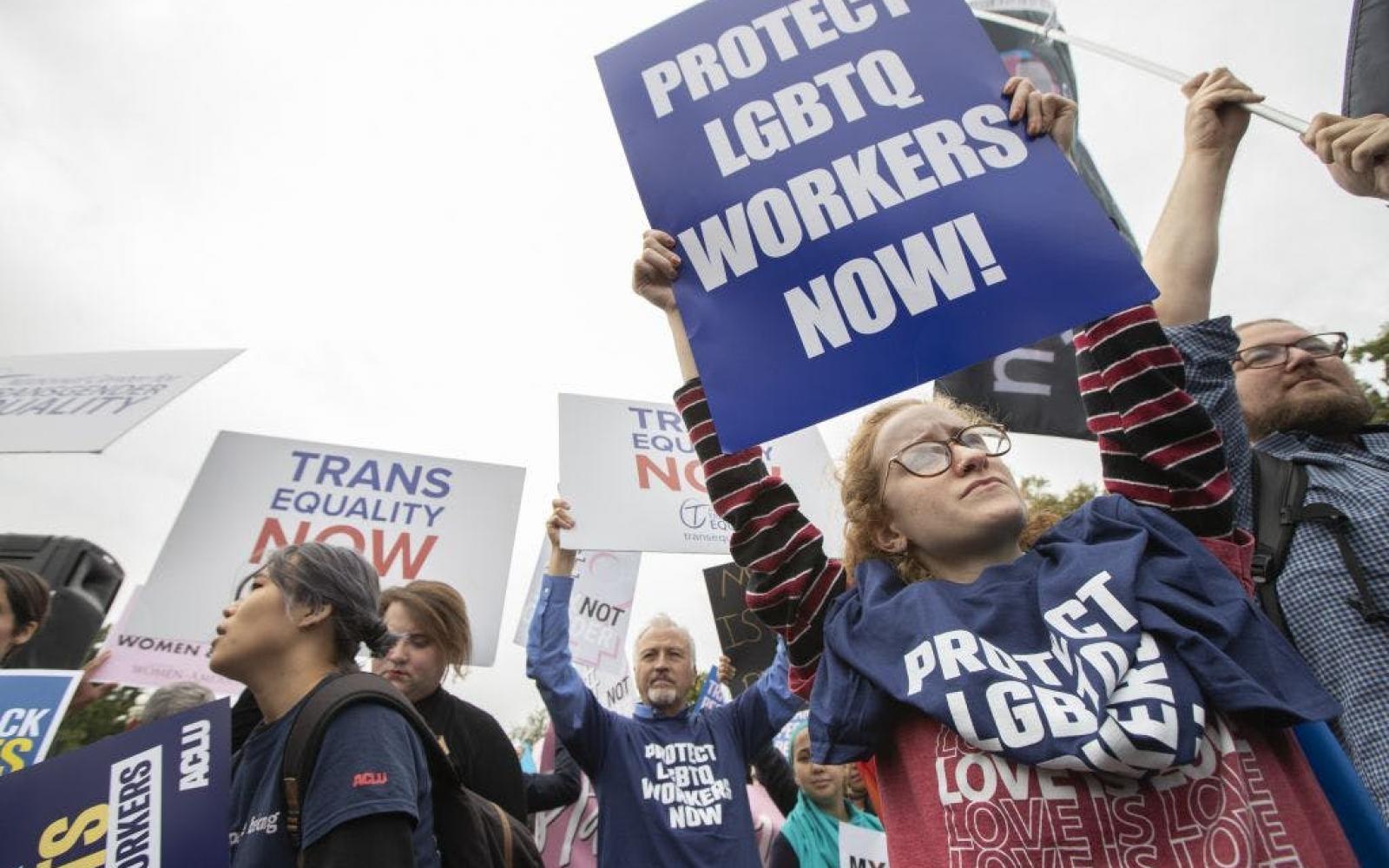 In a landmark rulling, The U.S. Supreme Court ruled Monday that it is illegal for an employer to fire someone because of their sexual orientation or gender identity, delivering a major victory in the fight for civil rights for LGBTQ people.

The court's 6-3 ruling extends the scope of Title VII of the Civil Rights Act, which bars discrimination on the basis of sex, race, color, national origin and religion, to include LGBTQ people. Chief Justice John Roberts and Justice Neil Gorsuch, who authored the majority's opinion, joined the liberal wing of the bench in ruling that "an employer who fires an individual merely for being gay or transgender violates Title VII."

"Judges are not free to overlook plain statutory commands on the strength of nothing more than suppositions about intentions or guesswork about expectations," Gorsuch wrote. "In Title VII, Congress adopted broad language making it illegal for an employer to rely on an employee's sex when deciding to fire that employee. We do not hesitate to recognize today a necessary consequence of that legislative choice: An employer who fires an individual merely for being gay or transgender defies the law."

The cases involving Title VII, of which there were three before the court, were the first involving LGBTQ rights to reach the justices since the retirement of Justice Anthony Kennedy in 2018. Kennedy authored the majority opinions in all major gay rights cases decided by the court, and President Trump replaced him with Justice Brett Kavanaugh, an appointment that shifted the court rightward.

The justices heard oral arguments in the legal battle over Title VII at the start of its term in October, during which Gorsuch, appointed to the high court by Mr. Trump, emerged as the likely swing vote.

Two of the three cases before the court involved gay men who said they were fired because of their sexual orientation.

Donald Zarda, who has since died, worked as a skydiving instructor in New York and argued he was fired after a woman accused him of touching her inappropriately and telling her he was gay during a tandem skydive in 2010.

Zarda filed a charge with the Equal Employment Opportunity Commission arguing he was discriminated against because of his sexual orientation and gender. He then sued his employer, Altitude Express, in federal district court in New York, alleging his firing violated Title VII.

The 2nd U.S. Circuit Court of Appeals sided with Zarda, finding "sexual orientation discrimination is motivated, at least in part, by sex and is thus a subset of sex discrimination for purposes of Title VII."

Like Zarda, Gerald Bostock, a child welfare services coordinator for the Clayton County Juvenile Court System in Georgia, said he lost his job because of his sexual orientation. Bostock was fired for "conduct unbecoming of a county employee" after he started participating in a gay recreational softball league in 2013.

Bostock sued Clayton County, alleging he was fired because of his sexual orientation in violation of Title VII. The 11th U.S. Circuit Court of Appeals upheld the district court's dismissal of the case.

The third legal battle before the justices raised the question of whether Title VII prohibits discrimination based on gender identity.

At the center of the case is Aimee Stephens, a transgender woman, who was fired from R.G. & G.R. Harris Funeral Homes in Michigan after she told her employer in 2013 she suffered from gender dysphoria and would dress as a woman at work. Stephens died in May.

Stephens filed a discrimination charge with the Equal Employment Opportunity Commission (EEOC) arguing she was illegally fired based on sex and gender identity in violation of Title VII. The EEOC then filed suit against the funeral home.

The federal district court ruled for Harris Homes, but the 6th U.S. Circuit Court of Appeals sided with Stephens. In its ruling, the lower court said "discrimination on the basis of transgender ... status violates Title VII."

In a dissenting opinion on Monday, Justice Samuel Alito, joined by Justice Clarence Thomas, accused the majority of legislating from the bench and likened the opinion to "a pirate ship" that "sails under a textualist flag."

"There is only one word for what the Court has done today: legislation," he wrote. "The document that the Court releases is in the form of a judicial opinion interpreting a statute, but that is deceptive."

In a separate dissent, Kavanaugh said it's the role of Congress and the president, not the court, to alter Title VII.

"When this Court usurps the role of Congress, as it does today, the public understandably becomes confused about who the policymakers really are in our system of separated powers, and inevitably becomes cynical about the oft-repeated aspiration that judges base their decisions on law rather than on personal preference," Kavanaugh wrote. "The best way for judges to demonstrate that we are deciding cases based on the ordinary meaning of the law is to walk the walk, even in the hard cases when we might prefer a different policy outcome."

The Supreme Court's ruling was cheered by former Vice President Joe Biden, the presumptive Democratic presidential nominee, who called it a "momentous step forward for our country."

"Today, by affirming that sexual orientation and gender identity discrimination are prohibited under Title VII of the Civil Rights Act, the Supreme Court has confirmed the simple but profoundly American idea that every human being should be treated with respect and dignity," he said in a statement.