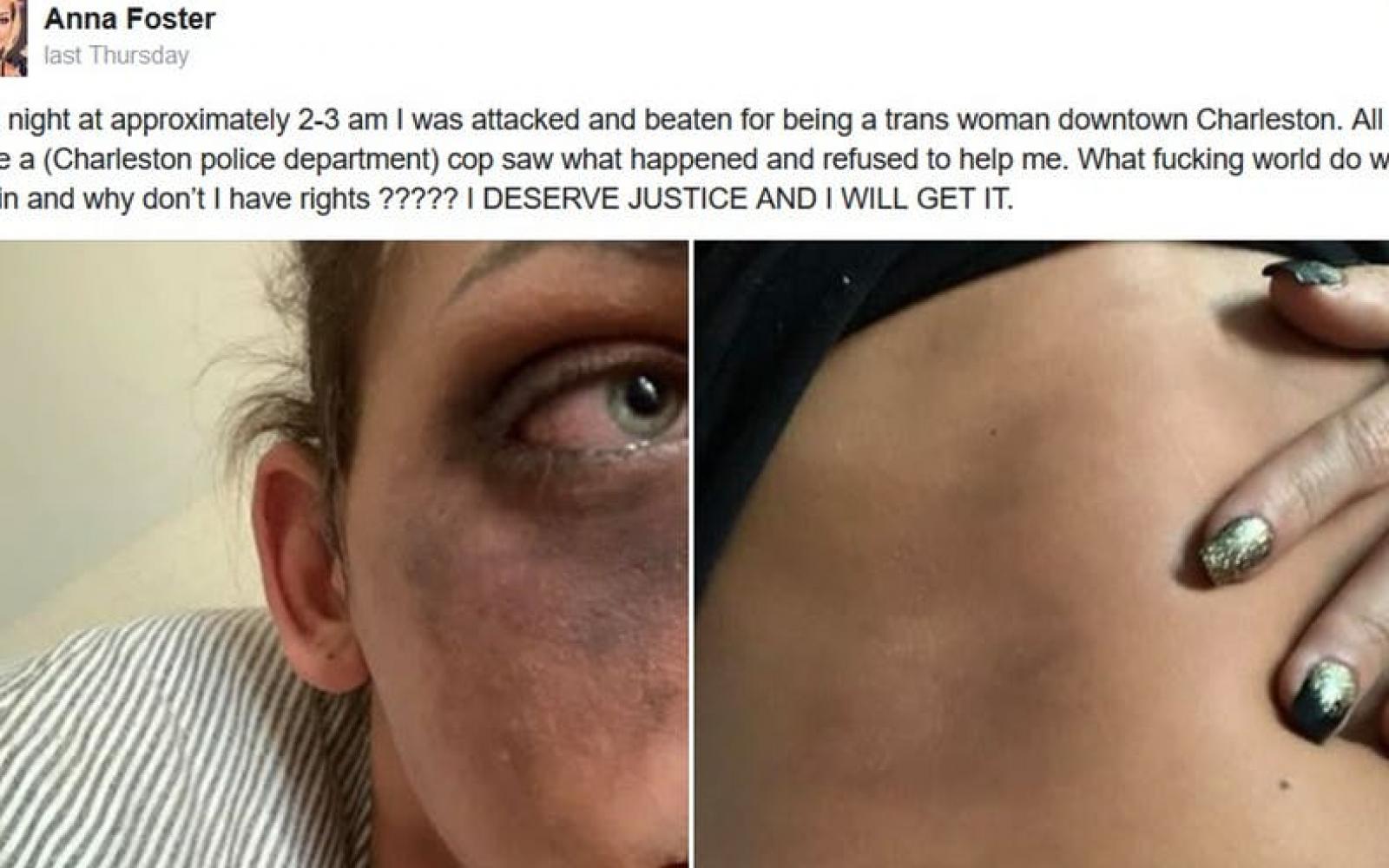 The Charleston Police Department is looking into an alleged attack of a transgender woman downtown. The case came to light after the woman posted about it on social media blasting the police department.

In the post, the woman stated she was attacked and beaten early Thursday morning—targeted for being transgender. She went on to say a Charleston Police officer saw what happened and refused to help.

The post on Facebook quickly went viral and currently had more than 700 comments on it by Monday.

Colleen Condon, an attorney and board president for the Alliance for Full Acceptance said they stepped in after someone draped a large sign over an MUSC parking garage which said, ‘Arm Trans People, F*** CPD’. She said it’s a disturbing message and not one they support.

“When we saw the post last week we jumped in and offered to provide whatever assistance we could,” Condon said.

CPD said they’ve been trying to investigate the woman’s claim since last week but have been unable to facilitate a meeting with her to gather additional information regarding the details of the assault. The report released Monday provided details from a phone conversation with the victim.

According to the police report, the woman was called derogatory names and assaulted by three suspects on Meeting and Calhoun Street on Thursday, October 17 between 2:00 a.m. and 3:00 a.m. The report did not mention anything about a Charleston Police officer present at the time of the assault or the victim approaching an officer for help.

Condon said her efforts to facilitate a meeting have not been successful, either. Condon said it’s not uncommon for crimes in the LGBT community to go unreported, but it’s a crucial step.

“The fear of not being believed, the fear of not being respected, not being listened to, those are all very valid fears,” said Condon. “It can be scary to file a police report and that’s why we’ve offered her and certainly offer any member of our community help. We’ll offer a location to meet, whatever we can do to make people feel safe about sharing all the information with police so they can properly go after it.”

CPD Officer Terry Cherry said they take claims like hers very seriously. She said the department has made major efforts in the last year to bridge the gap between police and the LGBT community.

“There was an attack on a transgender woman of color on Ann Street and we held a forum where people got to come and discuss how they felt about the handling of the issue,” Cherry said.

Cherry said officers are now trained on gender identity. She’s one of the teachers.

“We teach gender identity terminology, intersexuality that a lot of trans gendered women of color deal with, implicit bias, microaggressions, so officers get a good introduction to what people in the LGBT community go through,” said Cherry. “When it comes to interacting, we call them by the name they want, he, she or they, depending on what their preference is and try to the best of our ability to respect who they recognize themselves as.”

Cherry said people should feel comfortable coming to police about any issues or concerns, adding a number of CPD employees who proudly identify as LGBT. She said it’s important for victims to file a proper police report so they can investigate a crime thoroughly and stop something similar from happening again.